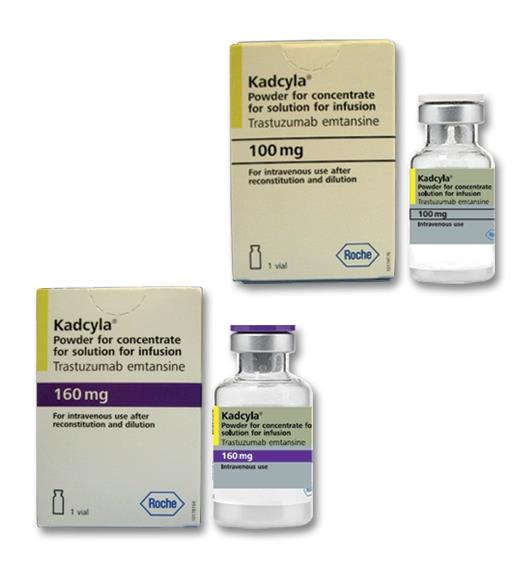 Concise Prescribing Info Full Prescribing Info Contents Description Action Indications/Uses Dosage/Direction for Use Overdosage Contraindications Special Precautions Use In Pregnancy & Lactation Adverse Reactions Drug Interactions Caution For Usage Storage MIMS Class ATC Classification Thai FDA Category Presentation/Packing
Full Prescribing Info
Contents
Trastuzumab emtansine.
Description
Dosage Preparations: 100 mg single-use vial containing powder for concentrate for infusion solution designed to deliver 5 ml of 20 mg/ml of trastuzumab emtansine.
160 mg single-use vial containing powder for concentrate for infusion solution designed to deliver 8 ml of 20 mg/ml of trastuzumab emtansine.
Sterile/Radioactive Statement: Sterile product.
Excipients/Inactive Ingredients: Sodium succinate, Sucrose, Polysorbate 20.
Action
Therapeutic/Pharmacologic Class of Drug: Antibody drug conjugate antineoplastic agent. ATC Code: L01XC14.
Pharmacology: Pharmacodynamics: Mechanism of Action: Kadcyla, trastuzumab emtansine, is a HER2-targeted antibody-drug conjugate which contains the humanized anti-HER2 IgG1, trastuzumab, covalently linked to the microtubule inhibitory drug DM1 (a maytansine derivative) via the stable thioether linker MCC (4-[N-maleimidomethyl] cyclohexane-1-carboxylate). Emtansine refers to the MCC-DM1 complex. An average of 3.5 DM1 molecules are conjugated to each molecule of trastuzumab.
Conjugation of DM1 to trastuzumab confers selectivity of the cytotoxic agent for HER2-overexpressing tumor cells, thereby increasing intracellular delivery of DM1 directly to malignant cells. Upon binding to HER2, trastuzumab emtansine undergoes receptor-mediated internalization and subsequent lysosomal degradation, resulting in release of DM1-containing cytotoxic catabolites (primarily lysine-MCC-DM1).
Kadcyla has the mechanisms of action of both trastuzumab and DM1: Trastuzumab emtansine, like trastuzumab, binds to domain IV of the HER2 extracellular domain (ECD), as well as to Fcγ receptors and complement C1q. In addition, Kadcyla, like trastuzumab, inhibits shedding of the HER2 ECD, inhibits signaling through the phosphatidylinositol 3-kinase (PI3-K) pathway, and mediates antibody-dependent cell-mediated cytotoxicity (ADCC) in human breast cancer cells that overexpress HER2.
DM1, the cytotoxic drug component of Kadcyla, binds to tubulin. By inhibiting tubulin polymerization, both DM1 and Kadcyla cause cells to arrest in the G2/M phase of the cell cycle, ultimately leading to apoptotic cell death. Results from in vitro cytotoxicity assays show that DM1 is 20-200 times more potent than taxanes and vinca alkaloids.
The MCC linker is designed to limit systemic release and increase targeted delivery of DM1, as demonstrated by detection of very low levels of free DM1 in plasma.
Clinical/Efficacy Studies: Efficacy: Early Breast Cancer: KATHERINE (BO27938) was a randomized, multicenter, open-label trial of 1486 patients with HER2-positive, early breast cancer with residual invasive tumor in the breast and/or axillary lymph nodes following taxane and trastuzumab-based therapy as part of a neoadjuvant regimen before trial enrollment. Patients received radiotherapy and/or hormonal therapy concurrent with study treatment as per local guidelines. Breast tumor samples were required to show HER2 overexpression defined as 3+ IHC or ISH amplification ratio ≥ 2.0 determined at a central laboratory. Patients were randomized (1:1) to receive trastuzumab or KADCYLA. Randomization was stratified by clinical stage at presentation, hormone receptor status, preoperative HER2-directed therapy (trastuzumab, trastuzumab plus additional HER2-directed agent[s]), and pathological nodal status evaluated after preoperative therapy.
KADCYLA was given intravenously at 3.6 mg/kg on Day 1 of a 21-day cycle. Trastuzumab was given intravenously at 6 mg/kg on Day 1 of a 21-day cycle. Patients were treated with KADCYLA or trastuzumab for a total of 14 cycles unless there was recurrence of disease, withdrawal of consent, or unacceptable toxicity, whichever occurred first. At the time of the primary analysis, median treatment duration was 10 months (range: 1-12) for KADCYLA, and median treatment duration 10 months (range: 1-13) for trastuzumab. Patients who discontinued KADCYLA could complete the duration of their intended study treatment up to 14 cycles of HER2-directed therapy with trastuzumab, if appropriate, based on toxicity considerations and investigator discretion.
The primary efficacy endpoint of the study was Invasive Disease Free Survival (IDFS). IDFS was defined as the time from the date of randomization to first occurrence of ipsilateral invasive breast tumor recurrence, ipsilateral local or regional invasive breast cancer recurrence, distant recurrence, contralateral invasive breast cancer, or death from any cause. Additional endpoints included IDFS including second primary non-breast cancer, disease free survival (DFS), overall survival (OS), and distant recurrence-free interval (DRFI).
Patient demographics and baseline tumor characteristics were balanced between treatment arms. The median age was approximately 49 years (range 23-80 years), 72.8% were White, 8.7% were Asian and 2.7% were Black or African American. All but 5 patients were women. 22.5 percent of patients were enrolled in North America, 54.2% in Europe and 23.3% throughout the rest of the world. Tumor prognostic characteristics including hormone receptor status (positive: 72.3%, negative: 27.7%), clinical stage at presentation (inoperable: 25.3%, operable: 74.8%) and pathological nodal status after preoperative therapy (node positive: 46.4%, node negative not evaluated: 53.6%) were similar in the study arms.
The majority of the patients (76.9%) had received an anthracycline-containing neoadjuvant chemotherapy regimen. 19.5% of patients received another HER2-targeted agent in addition to trastuzumab as a component of neoadjuvant therapy. Pertuzumab was the second therapy in 93.8% of patients who received a second neoadjuvant HER2-directed agent.
A clinically meaningful and statistically significant improvement in IDFS was observed in patients who received trastuzumab emtansine compared with trastuzumab (HR = 0.50, 95% CI [0.39, 0.64], p <0.0001), corresponding to a 50% reduction in risk of an IDFS event. Estimates of 3 years IDFS rates were 88.3% vs. 77.0% in trastuzumab emtansine vs. trastuzumab arms, respectively. See Table 1 and Figures 1 and 2.

Patient reported outcomes included the assessment of patient-reported global health status, role and physical function, and treatment symptoms using the EORTC QLQ-C30 and EORTC QLQ-BR23. In the analyses of patient-reported outcomes, a 10-point difference was considered clinically meaningful.
Patients' function, global health status, and symptom scores showed no clinically meaningful change from baseline over the course of treatment or during follow-up. Mean change from baseline at Cycle 11 for physical function was -0.6 (95% CI -1.9-0.7) in the trastuzumab emtansine arm and 1.8 (95% 0.6-3.1) in the trastuzumab arm; global health status was 0.4 (95% CI -2.2-1.3) in the trastuzumab emtansine arm and 1.4 (95% CI -0.2-3.0) in the trastuzumab arm. No clear differences were observed in function, global health status, or symptoms between the two treatment arms and at no timepoint during the study were the average scores on those scales of patients in the trastuzumab emtansine arm clinically worse than those of patients in the trastuzumab arm.
Metastatic Breast Cancer: A Phase III, randomized, multicenter, international, open-label clinical trial (TDM4370g/BO21977) was conducted in patients with HER2-positive unresectable locally advanced breast cancer or MBC who had received prior taxane and trastuzumab-based therapy, including patients who received prior therapy with trastuzumab and a taxane in the adjuvant setting and who relapsed within six months of completing adjuvant therapy. Prior to enrollment, breast tumor samples were required to be centrally confirmed for HER2-positive disease defined as a score of 3+ by IHC or gene amplification by ISH. Baseline patient and tumor characteristics were well balanced between treatment groups. For patients randomized to Kadcyla, the median age was 53 years, most patients were female (99.8%), the majority were Caucasian (72%), and 57% had estrogen-receptor and/or progesterone-receptor positive disease. The study compared the safety and efficacy of Kadcyla with that of lapatinib plus capecitabine. A total of 991 patients were randomized with Kadcyla or lapatinib plus capecitabine as follows: Kadcyla Arm: Kadcyla 3.6 mg/kg intravenously (IV) over 30-90 minutes on Day 1 of a 21-day cycle.
Control Arm (lapatinib plus capecitabine): lapatinib 1250 mg/day orally once per day of a 21-day cycle plus capecitabine 1000 mg/m2 orally twice daily on Days 1-14 of a 21-day cycle.
The co-primary efficacy endpoints of the study were progression-free survival (PFS) as assessed by an independent review committee (IRC), and overall survival (OS) and landmark (1-year and 2-year) survival rates.
Time to symptom progression, as defined by a 5-point decrease in the score derived from the trials outcome index-breast (TOI-B) subscale of the Functional Assessment of Cancer Therapy-Breast Quality of Life (FACT-B QoL) questionnaire was also assessed during the clinical trial. A change of 5 points in the TOI-B is considered clinically significant. (See Table 2.)

Postmarketing Experience: Not applicable.
View ADR Monitoring Form
Drug Interactions
No formal drug-drug interaction studies with Kadcyla in humans have been conducted. In vitro metabolism studies in human liver microsomes suggest that DM1, a component of trastuzumab emtansine, is metabolized mainly by CYP3A4 and, to a lesser extent, by CYP3A5. DM1 does not induce or inhibit P450-mediated metabolism in vitro. Caution should be taken when Kadcyla is co-administered with potent CYP3A inhibitors.
Caution For Usage
Special Instructions for Use, Handling and Disposal: Appropriate aseptic technique should be used. Appropriate procedures for the preparation of chemotherapeutic drugs should be used.
The reconstituted product contains no preservative and is intended for single use only. Discard any unused portion.
Using a sterile syringe, slowly inject 5 ml of Sterile Water for Injection into the 100 mg vial, or 8 mL of sterile water for injection into the 160 mg Kadcyla vial.
Swirl the vial gently until completely dissolved. DO NOT SHAKE!
Store reconstituted Kadcyla at 2-8ºC; discard unused Kadcyla after 24 hours.
Reconstituted solution should be inspected visually for particulate matter and discoloration prior to administration. The reconstituted solution should be free of visible particulates, clear to slightly opalescent. The color of the reconstituted solution should be colorless to pale brown. Do not use if reconstituted solution contains visible particulates, or is cloudy, or is discolored.
Instructions for Dilution: Determine the volume of the solution required based on a dose of 3.6 mg Kadcyla/kg body weight (see Dose Reduction Schedule under Dosage & Administration):

The appropriate amount of solution should be withdrawn from the vial and added to an infusion bag containing 250 ml of 0.45% sodium chloride or 0.9% sodium chloride. Dextrose (5%) solution should not be used. 0.45% sodium chloride may be used without a 0.2 or 0.22 micron in-line polyethersulfone (PES) filter. If 0.9% sodium chloride is used for infusion, a 0.2 or 0.22 micron in-line polyethersulfone (PES) filter is required. Once the infusion is prepared it should be administered immediately. If not used immediately, the infusion can be stored for up to 24 hours in a refrigerator at 2°C-8°C. Do not freeze or shake the infusion during storage.
Disposal of unused/expired medicines: The release of pharmaceuticals in the environment should be minimized. Medicines should not be disposed of via wastewater and disposal through household waste should be avoided. Use established "collection systems", if available in the location.
The following points should be strictly adhered to regarding the use and disposal of syringes and other medicinal sharps: Needles and syringes should never be reused.
Place all used needles and syringes into a sharps container (puncture-proof disposable container).
Local requirements should be followed for the disposal process of unused/expired medicines or waste material.
Incompatibilities: Dextrose (5%) solution should not be used since it causes aggregation of the protein.
Kadcyla should not be mixed or diluted with other drugs.
Storage
Vials: Store vials at 2-8°C.
Shelf-life of the reconstituted solution: Product vials reconstituted with sterile water for injection should be used immediately following reconstitution. If not used immediately, the reconstituted vials can be stored for up to 24 hours at 2-8°C, and must be discarded thereafter.
Do not freeze the reconstituted solution.
Shelf-life of the solution for infusion containing the reconstituted product: The reconstituted Kadcyla solution diluted in polyvinyl chloride (PVC) or latex-free PVC-free polyolefin bags containing 0.9% Sodium Chloride Injection, or 0.45% Sodium Chloride Injection, may be stored at 2-8°C for up to 24 hours prior to use. Particulates may be observed on storage if diluted in 0.9% Sodium Chloride Injection, therefore, a 0.2 or 0.22 micron in-line polyethersulfone (PES) filter is required for administration (see Special Instructions for Use, Handling and Disposal under Cautions for Usage).
Do not freeze the solution for infusion containing the reconstituted product.
MIMS Class
Targeted Cancer Therapy
ATC Classification
L01XC14 - trastuzumab emtansine ; Belongs to the class of monoclonal antibodies, other antineoplastic agents. Used in the treatment of cancer.