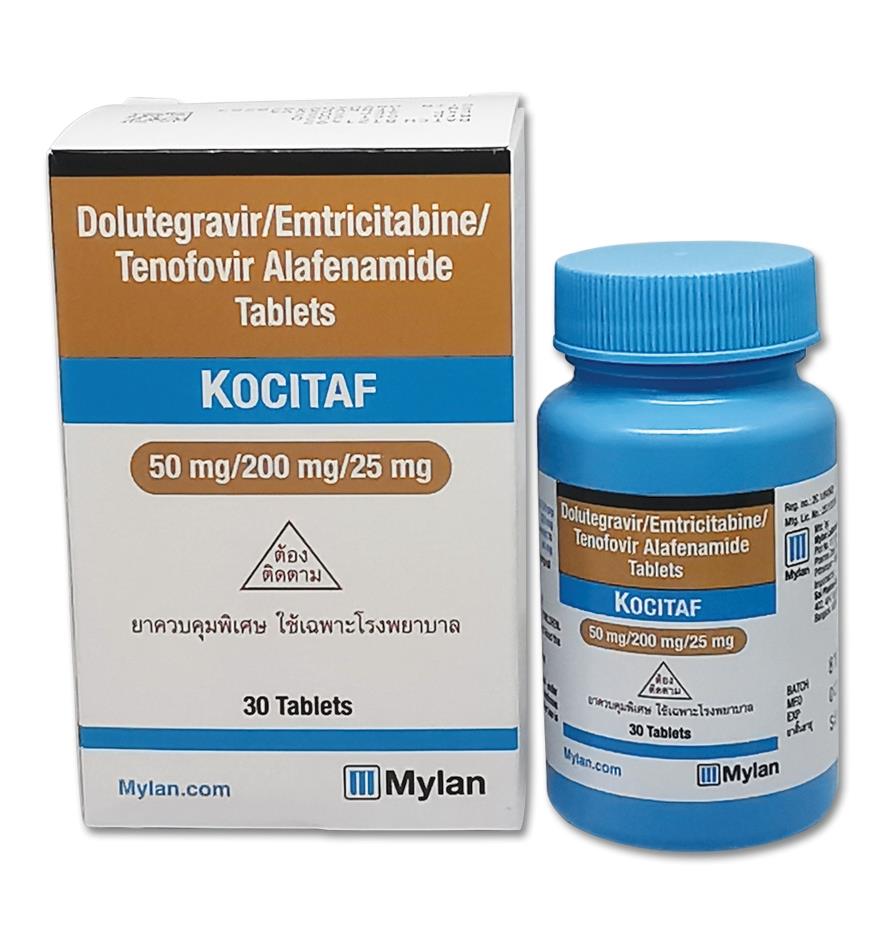 In the SAILING study, virologic suppression (HIV-1 RNA <50 copies/mL) in the Dolutegravir arm (71%) was statistically superior to the raltegravir arm (64%), at Week 48 (p=0.03).
Statistically fewer subjects failed therapy with treatment-emergent integrase resistance on Dolutegravir (4/354, 1%) than on raltegravir (17/361, 5%) (p=0.003) (Refer to Resistance: in vivo as previously mentioned for details).
Patients with prior treatment failure that included an integrase inhibitor (and integrase class resistance): In the multicentre, open-label, single arm VIKING-3 study (ING112574), HIV-1 infected, ART experienced adults with virological failure and current or historical evidence of raltegravir and/or elvitegravir resistance received Dolutegravir 50 mg twice daily with the current failing background regimen for 7 days but with optimised background ART from Day 8. The study enrolled 183 patients, 133 with INI-resistance at Screening and 50 with only historical evidence of resistance (and not at Screening). Raltegravir/elvitegravir was part of the current failing regimen in 98/183 patients (part of prior failing therapies in the others). At baseline, median patient age was 48 years, 23% were female, 29% non-white, and 20% had hepatitis B and/or C co-infection. Median baseline CD4+ was 140 cells/mm3, median duration of prior ART was 14 years, and 56% were CDC Class C. Subjects showed multiple class ART resistance at baseline: 79% had ≥2 NRTI, 75% ≥1 NNRTI, and 71% ≥2 PI major mutations; 62% had non-R5 virus.
Mean change from baseline in HIV RNA at day 8 (primary endpoint) was -1.4log10 copies/mL (95% CI -1.3 – -1.5log10, p<0.001). Response was associated with baseline INI mutation pathway, as shown in Table 3. (See Table 3.)

In patients without a primary mutation detected at baseline (N=60) (i.e. RAL/EVG not part of current failing therapy) there was a 1.63 log10 reduction in viral load at day 8.
After the functional monotherapy phase, subjects had the opportunity to re-optimize their background regimen when possible. The overall response rate through 24 weeks of therapy, 69% (126/183), was generally sustained through 48 weeks with 116/183 (63%) of patients with HIV-1 RNA <50c/mL (ITT-E, Snapshot algorithm). When excluding patients who stopped therapy for non-efficacy reasons, and those with major protocol deviations (incorrect dolutegravir dosing, intake of prohibited co-medication), namely, "the Virological Outcome (VO)-population)", the corresponding response rates were 75% (120/161, week 24) and 69% (111/160, week 48).
The response was lower when the Q148-mutation was present at baseline, and in particular in the presence of ≥2 secondary mutations, Table 4. The overall susceptibility score (OSS) of the optimised background regimen (OBR) was not associated with Week 24 response, nor with the week 48 response. (See Table 4.)

The median change in CD4+ T cell count from baseline for VIKING-3 based on observed data was 61 cells/mm3 at Week 24 and 110 cells/mm3 at Week 48.
In the double blind, placebo-controlled VIKING-4 study (ING116529), 30 HIV-1 infected, ART-experienced adults with primary genotypic resistance to INIs at Screening, were randomised to receive either dolutegravir 50 mg twice daily or placebo with the current failing regimen for 7 days followed by an open label phase with all subjects receiving dolutegravir. At baseline, median patient age was 49 years, 20% were female, 58% non-white, and 23% had hepatitis B and/or C co-infection. Median baseline CD4+ was 160 cells/mm3, median duration of prior ART was 13 years, and 63% were CDC Class C. Subjects showed multiple class ART resistance at baseline: 80% had ≥2 NRTI, 73% ≥1 NNRTI, and 67% ≥2 PI major mutations; 83% had non-R5 virus. Sixteen of 30 subjects (53%) harboured Q148 virus at baseline. The primary endpoint at Day 8 showed that dolutegravir 50 mg twice daily was superior to placebo, with an adjusted mean treatment difference for the change from Baseline in Plasma HIV-1 RNA of -1.2 log10 copies/mL (95% CI -1.5 - -0.8log10 copies/mL, p<0.001). The day 8 responses in this placebo controlled study were fully in line with those seen in VIKING-3 (not placebo controlled), including by baseline integrase resistance categories. At week 48, 12/30 (40%) subjects had HIV-1 RNA <50 copies/mL (ITT-E, Snapshot algorithm).
In a combined analysis of VIKING-3 and VIKING-4 (n=186, VO population), the proportion of subjects with HIV RNA <50 copies/mL at Week 48 was 126/186 (68%). The proportion of subjects with HIV RNA <50 copies/mL was 96/126 (76%) for No Q148 mutations, 22/41 (54%) for Q148+1 and 5/19 (26%) for Q148+≥2 secondary mutations.
Paediatric population: In a Phase I/II 48 week multicentre, open-label study (P1093/ING112578), the pharmacokinetic parameters, safety, tolerability and efficacy of Dolutegravir will be evaluated in combination regimens in HIV-1 infected adolescents.
At 24 weeks, 16 of 23 (70%) adolescents (12 to less than 18 years of age) treated with Dolutegravir once daily (35 mg n=4, 50 mg n=19) plus OBR achieved viral load <50 copies/mL.
Four subjects had virologic failure none of which had INI resistance at the time of virologic failure.
The European Medicines Agency has deferred the obligation to submit the results of studies with combination of Dolutegravir in one or more subsets of the paediatric population (aged 4 weeks to below 12 years) in the treatment of HIV-1 infection (see Dosage & Administration for information on paediatric use).
Emtricitabine and Tenofovir alafenamide: In treatment-naïve patients: In a pooled analysis of antiretroviral-naïve patients receiving emtricitabine and tenofovir alafenamide (10 mg) given with elvitegravir and cobicistat as a fixed-dose combination tablet in GS-US-292-0104, GS-US-292-0111, and GS-US-292-0102, genotyping was performed on plasma HIV-1 isolates from all patients with HIV-1 RNA > 400 copies/mL at confirmed virological failure, at Week 48, or at the time of early study drug discontinuation. Through Week 48, the development of one or more primary emtricitabine, tenofovir alafenamide, or elvitegravir resistance-associated mutations was observed in HIV-1 isolates from 7 of 14 patients with evaluable genotypic data from paired baseline and E/C/F/TAF treatment-failure isolates (7 of 978 patients [0.7%]) compared with 7 of 15 treatment-failure isolates from patients in the E/C/F/TDF group (7 of 925 patients [0.8%]). In the E/C/F/TAF group, the mutations that emerged were M184V/I (n = 7) and K65R (n = 1) in RT and T66T/A/I/V (n = 2), E92Q (n = 2), Q148Q/R (n = 1), and N155H (n = 1) in integrase. In the E/C/F/TDF group, the mutations that emerged were M184V/I (n = 7) and K65R (n = 2) in RT and E92E/Q (n = 3) and Q148R (n = 2) in integrase. All HIV-1 isolates from patients in both treatment groups who developed resistance mutations to elvitegravir in integrase also developed resistance mutations to emtricitabine in RT.
Cross-resistance in HIV-1 infected, treatment-naïve or virologically suppressed patients: Emtricitabine-resistant viruses with the M184V/I substitution were cross-resistant to lamivudine, but retained sensitivity to didanosine, stavudine, tenofovir, and zidovudine.
The K65R and K70E mutations result in reduced susceptibility to abacavir, didanosine, lamivudine, emtricitabine, and tenofovir, but retain sensitivity to zidovudine.
Multinucleoside-resistant HIV-1 with a T69S double insertion mutation or with a Q151M mutation complex including K65R showed reduced susceptibility to tenofovir alafenamide.
Clinical data: Clinical efficacy of with Emtricitabine and Tenofovir alafenamide was established from studies conducted with emtricitabine and tenofovir alafenamide when given with elvitegravir and cobicistat as the fixed-dose combination tablet E/C/F/TAF.
HIV-1 infected, treatment-naïve patients: In studies GS-US-292-0104 and GS-US-292-0111, patients were randomized in a 1:1 ratio to receive either emtricitabine 200 mg and tenofovir alafenamide 10 mg (n = 866) once daily or emtricitabine 200 mg + tenofovir disoproxil (as fumarate) 245 mg (n = 867) once daily, both given with elvitegravir 150 mg + cobicistat 150 mg as a fixed-dose combination tablet. The mean age was 36 years (range: 18-76), 85% were male, 57% were White, 25% were Black, and 10% were Asian. Nineteen percent of patients were identified as Hispanic/Latino. The mean baseline plasma HIV-1 RNA was 4.5 log10 copies/mL (range: 1.3-7.0) and 23% had baseline viral loads > 100,000 copies/mL. The mean baseline CD4+ cell count was 427 cells/mm3 (range: 0-1,360) and 13% had a CD4+ cell count < 200 cells/mm3.
E/C/F/TAF met the non-inferiority criteria in achieving HIV-1 RNA < 50 copies/mL when compared to E/C/F/TDF. Pooled treatment outcomes at 48 weeks are shown in Table 5. (See Table 5.)