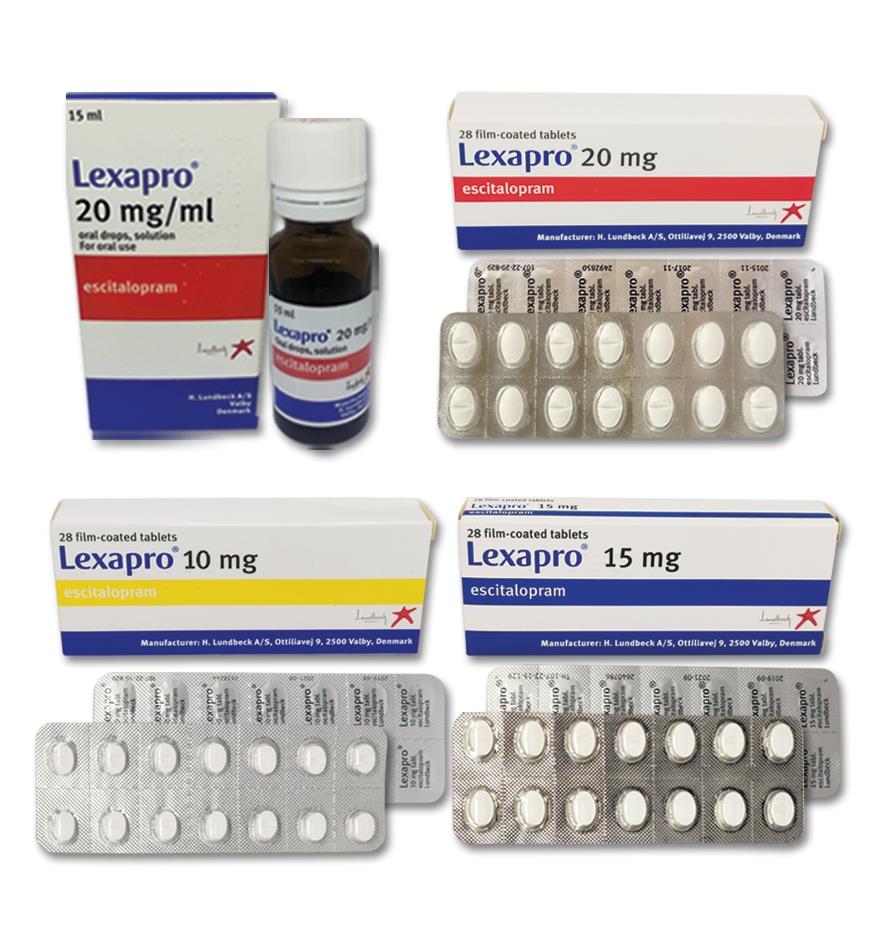 Cases of QT-prolongation have been reported during the post-marketing period, predominantly in patients with pre-existing cardiac disease. In a double-blind, placebo-controlled ECG study in healthy subjects, the change from baseline in QTc (Fridericia-correction) was 4.3 msec at the 10 mg/day dose and 10.7 msec at the 30 mg/day dose.
Epidemiological studies mainly conducted in patients 50 years of age and older, show an increased risk of bone fractures in patients receiving SSRIs and TCAs. The mechanism leading to this risk is unknown.
Discontinuation symptoms seen when stopping treatment: Discontinuation of SSRIs/SNRIs (particularly when abrupt) commonly leads to discontinuation symptoms. Dizziness, sensory disturbances (including paraesthesia and electric shock sensations), sleep disturbances (including insomnia and intense dreams), agitation or anxiety, nausea and/or vomiting, tremor, confusion, sweating, headache, diarrhea, palpitations, emotional instability, irritability, and visual disturbances are the most commonly reported reactions. Generally, these events are mild to moderate and are self-limiting, however, in some patients,they may be severe and/or prolonged. It is therefore advised that when escitalopram treatment is no longer required, gradual discontinuation by dose tapering should be carried out (see Dosage & Administration and Precautions).
View ADR Monitoring Form
Drug Interactions
Pharmacodynamic interactions: Contra-indicated combinations: Non-selective, irreversible MAOIs: Cases of serious reactions have been reported in patients receiving an SSRI in combination with a non-selective irreversible monoamine oxidase inhibitor (MAOI), and in patients who have recently discontinued SSRI treatment and have been started on MAOI treatment (see Contraindications). In some cases, the patient developed serotonin syndrome (see Adverse Reactions).
Escitalopram is contra-indicated in combination with non-selective irreversible MAOIs. Escitalopram may be started 14 days after discontinuing treatment with an irreversible MAOI. At least 7 days should elapse after discontinuing escitalopram treatment, before starting a non-selective irreversible MAOI.
Pimozide: Co-administration of a single dose of pimozide 2 mg to subjects treated with racemic citalopram 40 mg/day for 11 days caused an increase in AUC and Cmax of pimozide, although not consistently throughout the study. The co-administration of pimozide and citalopram resulted in a mean increase in the QTc interval of approximately 10 msec. Due to the interaction noted at a low dose of pimozide, concomitant administration of escitalopram and pimozide is contraindicated.
Combinations requiring precautions for use: Reversible, selective MAO-A inhibitor (moclobemide): Due to the risk of serotonin syndrome, the combination of escitalopram with a MAO-A inhibitor is not recommended (see Precautions). If the combination proves necessary, it should be started at the minimum recommended dosage and clinical monitoring is strongly recommended.
Escitalopram may be started at least one day after discontinuing treatment with the reversible MAOI (RIMA), moclobemide.
Selegiline: In combination with selegiline (irreversible MAO-B inhibitor), caution is required due to the risk of developing serotonin syndrome.
Serotonergic medicinal products: Co-administration with serotonergic medicinal products (e.g. tramadol, sumatriptan and other triptans) may lead to serotonin syndrome.
Medicinal products lowering the seizure threshold: SSRIs can lower the seizure threshold. Caution is advised when concomitantly using other medicinal products capable of lowering the seizure threshold (e.g. antidepressants (tricyclics, SSRIs), neuroleptics (phenothiazines, thioxanthenes, butyrophenones), mefloquine, bupropion and tramadol).
Lithium, tryptophan: There have been reports of enhanced effects when SSRIs have been given together with lithium or tryptophan, therefore concomitant use of SSRIs with these medicinal products should be undertaken with caution.
St. John's Wort: Concomitant use of SSRIs and herbal remedies containing St. John's Wort (Hypericum perforatum) may result in an increased incidence of adverse reactions (see Precautions).
Haemorrhage: Altered anti-coagulant effects may occur when escitalopram is combined with oral anticoagulants.
Patients receiving oral anticoagulant therapy should receive careful coagulation monitoring when escitalopram is started or stopped (see Precautions).
Concomitant use of non-steroidal anti-inflammatory drugs (NSAIDs) may increase bleeding-tendency (see Precautions).
Alcohol: No pharmacodynamic or pharmacokinetic interactions are expected between escitalopram and alcohol. However, as with other psychotropic medicinal products, the combination with alcohol is not advisable.
Pharmacokinetic interactions: Influence of other medicinal products on the pharmacokinetics of escitalopram: The metabolism of escitalopram is mainly mediated by CYP2C19. CYP3A4 and CYP2D6 may also contribute to the metabolism although to a smaller extent. The metabolism of the major metabolite S-DCT (demethylated escitalopram) seems to be partly catalyzed by CYP2D6.
Co-administration of escitalopram with omeprazole (a CYP2C19 inhibitor) resulted in moderate (approximately 50%) increase in plasma concentrations of escitalopram.
Co-administration of escitalopram with cimetidine (moderately potent general enzyme-inhibitor) resulted in moderate (approximately 70%) increase in the plasma concentrations of escitalopram.
Caution should thus be exercised at the upper end of the dose range of escitalopram when used concomitantly with CYP2C19 inhibitors (e.g. omeprazole, fluoxetine, fluvoxamine, lansoprazole, ticlopidine) and with cimetidine.
A reduction in the dose of escitalopram may be necessary based on clinical judgement.
Effect of escitalopram on the pharmacokinetics of other medicinal products: Escitalopram is an inhibitor of the enzyme CYP2D6. Caution is recommended when escitalopram is co-administered with medicinal products that are mainly metabolized by this enzyme, and that have a narrow therapeutic index, e.g. flecainide, propafenone and metoprolol (when used in cardiac failure), or some CNS acting medicinal products that are mainly metabolised by CYP2D6, e.g. antidepressants such as desipramine, clomipramine and nortriptyline or antipsychotics like risperidone, thioridazine and haloperidol. Dosage adjustment may be warranted.
Co-administration with desipramine or metoprolol resulted in a two-fold increase in the plasma levels of these two CYP2D6 substrates.
In vitro studies have demonstrated that escitalopram may also cause weak inhibition of CYP2C19. Caution is recommended with concomitant use of medicinal products that are metabolised by CYP2C19.
Caution For Usage
Incompatibilities: Tablet: Not applicable.
Drops: In the absence of compatibility studies, this medicinal product must not be mixed with other medicinal products.
Special precautions for disposal: Any unused product or waste material should be disposed of in accordance with local requirements.
Storage
Shelf-life: Tablet: 2 years.
Drops: 3 years when stored below 30°C.
After opening, the drops should be used within 8 weeks when stored below 25°C.
Store below 30°C.
MIMS Class
Antidepressants
ATC Classification
N06AB10 - escitalopram ; Belongs to the class of selective serotonin reuptake inhibitors. Used in the management of depression.