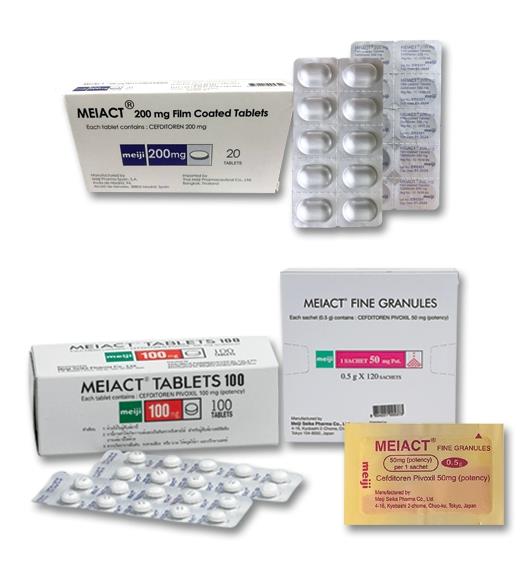 Concise Prescribing Info Full Prescribing Info Contents Description Action Indications/Uses Dosage/Direction for Use Overdosage Contraindications Warnings Special Precautions Use In Pregnancy & Lactation Adverse Reactions Drug Interactions Caution For Usage Storage MIMS Class ATC Classification Thai FDA Category Presentation/Packing
The information highlighted (if any) are the most recent updates for this brand.
Full Prescribing Info
Action
Pharmacotherapeutic group: Cephalosporins and related substances. ATC code: J01DA.
Pharmacology: 100 mg tablet and Fine granules for oral susp: Antibacterial activity: Cefditoren pivoxil is metabolized into cefditoren upon absorption from the intestinal wall and shows its antibacterial activity.
Cefditoren exerts antibacterial activity in vitro against a wide spectrum of gram-positive and gram-negative bacteria. Its activity against gram-positive bacteria including Staphylococcus sp. and Streptococcus sp. such as Streptococcus pneumoniae as well as against gram-negative bacteria including E. coli, B. catarrhalis, Klebsiella sp., Proteus sp. and H. influenzae and anaerobic bacteria including Peptostreptococcus sp., P. acnes and Bacteroides sp., is particularly noteworthy.
In vitro, cefditoren was stable to β-lactamase produced by various bacteria. It also shows strong antibacterial activity against strains that produce β-lactamase.
Mechanism of action: Cefditoren inhibits the synthesis of bacterial cell wall. It has high affinity to penicillin binding proteins (PBPs) in various bacteria, showing a bactericidal effect.
Therapeutic efficacy on experimental infections: Cefditoren pivoxil demonstrated excellent therapeutic efficacy on experimental infections by Staphylococcus aureus, S. pneumoniae, E. coli, Klebsiella pneumoniae and Proteus sp., in mice. Its therapeutic efficacy on the infections by β-lactamase - producing strains was equivalent or superior to similar drugs.
Pharmacodynamics: 200 mg tablet: Mode of action: Cefditoren exerts its antibacterial action by inhibiting bacterial cell wall synthesis due to its affinity for penicillin-binding proteins (PBPs).
Pharmacokinetic/Pharmacodynamic relationship: With a dosage of 200 mg twice daily, plasma concentrations exceed the minimum inhibitory concentrations (MIC90) for Moraxella catarrhalis, Haemophilus influenzae, Streptococcus pyogenes and penicillin-susceptible Streptococcus pneumoniae strains for at least 50% of the dose interval. The dosage of 400 mg twice daily, also provides a time above the minimum inhibitory concentrations which is enough to exceed the MIC90 of Streptococcus pneumoniae resistant to penicillin.
Mechanisms of resistance: Bacterial resistance to cefditoren may be due to one or more of the following mechanisms: Hydrolysis by beta-lactamases. Cefditoren may be efficiently hydrolysed by certain of the extended-spectrum beta-lactamases (ESBLs) and by the chromosomally encoded (AmpC) beta-lactamases that may be induced or stably derepressed in certain aerobic gram-negative bacterial species.
Reduced affinity of penicillin-binding proteins for cefditoren.
Outer membrane impermeability, which restricts access of cefditoren to penicillin-binding proteins in gram-negative organisms.
Active substance efflux pumps.
More than one of these mechanisms of resistance may co-exist in a single bacterial cell. Depending on the mechanism(s) present, bacteria may express cross-resistance to several or all other beta-lactams and/or antibacterial active substances of other families.
Gram-negative micro-organisms containing inducible chromosomally encoded beta-lactamases, like Enterobacter spp., Serratia spp., Citrobacter spp., and Providencia spp., should be regarded as resistant for cefditoren pivoxil in spite of apparent in vitro susceptibility.
Breakpoints: The recommended MIC breakpoints for cefditoren, which allow susceptible micro-organisms to be distinguished from intermediately susceptible micro-organisms, and intermediately susceptible organisms from resistant micro-organisms are: Susceptible ≤ 0.5 µg/ml, Resistant ≥ 2 µg/ml (or > 1 µg/ml according to recent criteria).
The prevalence of acquired resistance may vary geographically and with time for selected species and local information on resistance is desirable, particularly when treating severe infections. As necessary, expert advice should be sought when the local prevalence of resistance is such that the utility of the agent in at least some types of infections is questionable. (See Table 1.)

Fine granules: When cefditoren was orally administered to pediatric patients with normal renal function at doses of 3 mg/kg or 6 mg/kg after meals, the serum concentrations (Figure 2) and pharmacokinetic parameters (Table 3) of cefditoren demonstrated dose dependency. (See Figure 2 and Table 3.)

Urinary excretion rate lowered in parallel with degree of renal function disorder, showing delay in excretion.
200 mg tablet: Absorption: Following oral administration, cefditoren pivoxil is absorbed in the gastrointestinal tract and is hydrolysed to cefditoren by the action of esterases. The absolute bioavailability of orally administered cefditoren is approximately 15-20%.
The presence of food in the gastrointestinal tract increases the absorption of cefditoren pivoxil, with the Cmax and the AUC approximately 50% and 70% higher compared to fasting values.
A 200 mg dose administered with food gives a mean Cmax of 2.6 µg/ml after approximately 2.5 hours, while a 400 mg dose gives a mean Cmax value of 4.1 µg/ml in approximately the same time period.
Distribution: Plasma protein binding to cefditoren is 88%.
The volume of distribution at steady state is not significantly different from that calculated after a single dose administration and is relatively independent of the administered dose (40-65 litres).
After a single dose administration of 400 mg, penetration in bronchial mucosa and in bronchial secretion was 60% and 20% respectively of the plasma concentration. After the same dose, cefditoren concentrations in skin blister fluid reached 40% and 56% of plasma AUC after 8 and 12 hours, respectively.
Metabolism/Elimination: Following multiple dose administration, pharmacokinetic parameters were similar to those obtained after single dose administration, with no accumulation detected.
Up to 18% of the administered dose of cefditoren is recovered by excretion in urine without being metabolised.
The plasma elimination half-life of cefditoren is between 1 and 1.5 hours. Total clearance adjusted for bioavailability is from 25-30 l/h, while renal clearance is approximately 80-90 ml/min. Studies with labelled cefditoren in healthy volunteers suggest that the non-absorbed fraction is eliminated in faeces, where the majority of the administered cefditoren appears as inactive metabolites.
Cefditoren pivoxil is not detected in faecal extracts or in urine. The pivalate portion is eliminated through renal excretion as the conjugated pivaloylcarnitine.
Special populations: Gender: Pharmacokinetics of cefditoren pivoxil do not show clinically relevant differences between males and females.
Elderly: Plasma levels of cefditoren in elderly subjects (over 65 years) show Cmax and AUC that are approximately 26% and 33% higher than in younger adults. However, no dose adjustment is required except in cases of advanced hepatic and/or renal insufficiency.
Renal insufficiency: After multiple doses of cefditoren pivoxil 400 mg to patients with moderate to severe renal impairment, Cmax was 2-fold and AUC between 2.5 and 3-fold than those observed in normal healthy volunteers (see Dosage & Administration). There are no data available for patients undergoing dialysis.
Hepatic insufficiency: In mild hepatic insufficiency (Child-Pugh A) to moderate hepatic insufficiency (Child-Pugh B), multiple doses of 400 mg cefditoren pivoxil gave a slight increase in pharmacokinetic parameters compared to normal subjects. No data are available in patients with severe insufficiency (Child-Pugh C) (See Dosage & Administration).
Toxicology: Preclinical safety data: 200 mg tablet: Non-clinical data reveal no special hazard for humans based on conventional studies of safety pharmacology, repeated dose toxicity, genotoxicity and toxicity to reproduction.
Studies to evaluate the carcinogenic potential of cefditoren pivoxil have not been performed.