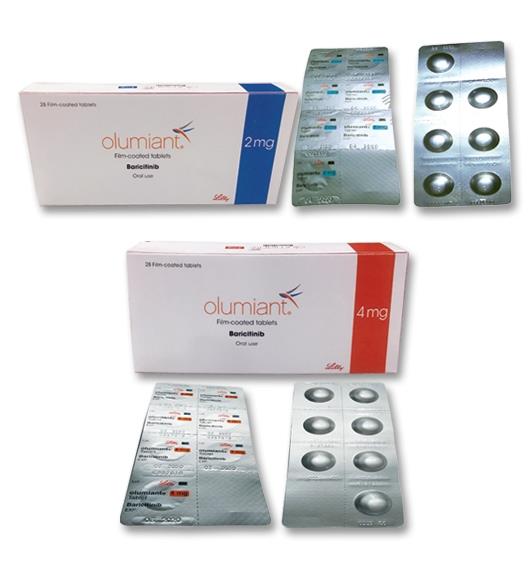 Concise Prescribing Info Full Prescribing Info Contents Description Action Indications/Uses Dosage/Direction for Use Overdosage Contraindications Warnings Special Precautions Use In Pregnancy & Lactation Adverse Reactions Drug Interactions Caution For Usage Storage MIMS Class ATC Classification Thai FDA Category Presentation/Packing
Full Prescribing Info
Drug Interactions
Pharmacodynamic interactions: Immunosuppressive medicinal products: Combination with biologic DMARDs, biologic immunomodulators or other JAK inhibitors has not been studied. In rheumatoid arthritis, use of baricitinib with potent immunosuppressive medicinal products such as azathioprine, tacrolimus, or ciclosporin was limited in clinical studies of baricitinib, and a risk of additive immunosuppression cannot be excluded. In atopic dermatitis, combination with ciclosporin or other potent immunosuppressants has not been studied and is not recommended (see Precautions).
Potential for other medicinal products to affect the pharmacokinetics of baricitinib: Transporters: In vitro, baricitinib is a substrate for organic anionic transporter (OAT)3, P-glycoprotein (Pgp), breast cancer resistance protein (BCRP) and multidrug and toxic extrusion protein (MATE)2-K. In a clinical pharmacology study, dosing of probenecid (an OAT3 inhibitor with strong inhibition potential) resulted in approximately a 2-fold increase in AUC(0-∞) with no change in tmax or Cmax of baricitinib. Consequently, the recommended dose in patients taking OAT3 inhibitors with a strong inhibition potential, such as probenecid, is 2 mg once daily (see Dosage & Administration). No clinical pharmacology study has been conducted with OAT3 inhibitors with less inhibition potential. The prodrug leflunomide rapidly converts to teriflunomide which is a weak OAT3 inhibitor and therefore may lead to an increase in baricitinib exposure. Since dedicated interaction studies have not been conducted, caution should be used when leflunomide or teriflunomide are given concomitantly with baricitinib. Concomitant use of the OAT3 inhibitors ibuprofen and diclofenac may lead to increased exposure of baricitinib, however their inhibition potential of OAT3 is less compared to probenecid and thus a clinically relevant interaction is not expected. Coadministration of baricitinib with ciclosporin (Pgp/BCRP inhibitor) or methotrexate (substrate of several transporters including OATP1B1, OAT1, OAT3, BCRP, MRP2, MRP3, and MRP4) resulted in no clinically meaningful effects on baricitinib exposure.
Cytochrome P450 enzymes: In vitro, baricitinib is a cytochrome P450 enzyme (CYP)3A4 substrate although less than 10% of the dose is metabolised via oxidation. In clinical pharmacology studies, coadministration of baricitinib with ketoconazole (strong CYP3A inhibitor) resulted in no clinically meaningful effect on the PK of baricitinib. Coadministration of baricitinib with fluconazole (moderate CYP3A/CYP2C19/CYP2C9 inhibitor) or rifampicin (strong CYP3A inducer) resulted in no clinically meaningful changes to baricitinib exposure.
Gastric pH modifying agents: Elevating gastric pH with omeprazole had no clinically significant effect on baricitinib exposure.
Potential for baricitinib to affect the pharmacokinetics of other medicinal products: Transporters: In vitro, baricitinib is not an inhibitor of OAT1, OAT2, OAT3, organic cationic transporter (OCT) 2, OATP1B1, OATP1B3, BCRP, MATE1 and MATE2-K at clinically relevant concentrations. Baricitinib may be a clinically relevant inhibitor of OCT1, however there are currently no known selective OCT1 substrates for which clinically significant interactions might be predicted. In clinical pharmacology studies there were no clinically meaningful effects on exposure when baricitinib was coadministered with digoxin (Pgp substrate) or methotrexate (substrate of several transporters).
Cytochrome P450 enzymes: In clinical pharmacology studies, coadministration of baricitinib with the CYP3A substrates simvastatin, ethinyl oestradiol, or levonorgestrel resulted in no clinically meaningful changes in the PK of these medicinal products.