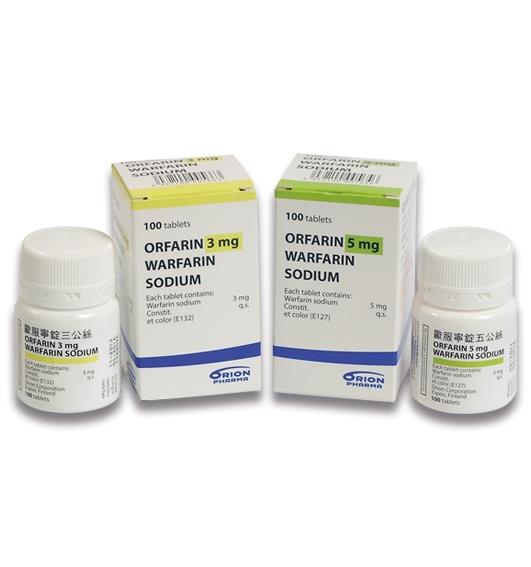 Concise Prescribing Info Full Prescribing Info Contents Description Action Indications/Uses Dosage/Direction for Use Overdosage Contraindications Special Precautions Use In Pregnancy & Lactation Adverse Reactions Drug Interactions Caution For Usage Storage MIMS Class ATC Classification Thai FDA Category Presentation/Packing
Full Prescribing Info
Contents
Warfarin sodium.
Description
Each tablet contains warfarin sodium 3 mg and 5 mg, respectively.
Excipients/Inactive Ingredients: Lactose monohydrate, maize starch, gelatin, magnesium stearate, indigo carmine (E132) for 3 mg tablet, erythrosine (E127) for 5 mg tablet.
Action
Pharmacotherapeutic Group: Oral anticoagulants. ATC Code: B01AA03.
Pharmacology: Pharmacodynamics: Warfarin or 4-hydroxycoumarin is an anticoagulant that prevents the vitamin K-dependent synthesis of clotting factors included anticoagulants factor protein C and protein S. Warfarin is racemic mixture. Of its isomers, S-warfarin is approximately 5 times as potent an anticoagulant as R-warfarin. The effect of warfarin is based on its ability to prevent the reduction and activity of vitamin K in the synthesis of coagulation factors II, VII, IX and X. In therapeutic doses, warfarin prevents the synthesis of vitamin K-dependent coagulation factors by 30 to 50% and reduces the biological activity of coagulation factors. It takes 72 to 96 hours for the full effect of warfarin to appear. During this time the coagulation factors already synthesised are eliminated.
Pharmacokinetics: The bioavailability of oral warfarin is over 95% and peak plasma concentration is achieved in 3 to 9 hours. Meals slow down but do not reduce the absorption. Warfarin binds strongly to serum albumin, the free fraction varies between 0.5 and 3%. The volume of distribution of warfain is approximately 0.14 L/kg. Warfarin crosses the placenta but is not excreted in the breast milk. Warfarin is metabolised in the liver catalysed by CYP2C9 (S-warfarin) and CYP1A2 and CYP3A (R-warfarin) into inactive metabolites which are principally excreted in the urine and to a lesser extent into the bile. Enterohepatic circulation does exist. The elimination half life of S-warfarin is 18 to 35 hours and that of R-warfarin 20 to 60 hours.
Toxicology: Preclinical Safety Data: Animal studies have shown warfarin to be teratogenic. In other respects, available preclinical safety data do not reveal further relevant information for humans.
Indications/Uses
Treatment and prevention of deep venous thrombosis and pulmonary embolism.
Prevention of thromboembolic complications (stroke or systemic embolism) after myocardial infarct.
Prevention of thromboembolic complications (stroke or systemic embolism) in patients with atrial fibrillation, cardiac valvular disease or prosthetic heart valves.
Dosage/Direction for Use
The target INR range of oral anticoagulant therapy: Prophylaxis of thromboembolic complications in patients with prosthetic heart valves: INR 2.5-3.5. Other indications: INR 2.0-3.0.
Adults: Patients in normal weight and the spontaneous INR under 1.2 are administered 10 mg of warfarin on three consecutive days. The dosing is continued according to the table as follows based on the INR measured on the fourth day.
In open care and for patients with inherited protein C or protein S deficiency the recommended initial dose is 5 mg of warfarin (*) in three days. The dosing is continued according to the table as follows, based on the INR-measured on the fourth day. (See Table 1.)
For elderly patients, for those small in size, for those with the spontaneous INR over 1.2, or for those who have a disease (see Precautions) or medication (see Interactions) affecting the efficacy of anticoagulant therapy, the recommended initial dose is 5 mg of warfarin (*) for two days. The dosing is continued according to table 2, based on the INR measurement performed on the third day. (See Table 2.)

INR measurements are carried out daily until the therapeutic level has been achieved (usually this takes 5 to 6 days). Intervals of INR measurements are then extended weekly. In long-term follow-up the measurement intervals are dependent i.a. on the patient's compliance and clinical status, targeting, however, on 4-weekly measurement intervals. If large fluctuations exist in the INR values or if the patient has a disease affecting liver function or the absorption of vitamin K, the measuring interval must be shorter than this. Many medicines may potentiate or weaken the effect of warfarin, which must be considered in the follow-up when initiating or discontinuing other medications. In long-term follow-up the adjustments required based on the INR measurements are made to the weekly dose. Thereafter the effect of the adjustment is checked by measuring the INR after 1 or 2 weeks of the adjustment. After this, the intervals are targeted on the same 4-weekly measurement intervals.
Children: The initiation and follow up of anticoagulant therapy in children is carried out by pediatricians. Dosage can be adjusted according to Table 2. (See Table 2.)

Elective Surgery: Pre-, peri- and postoperative anticoagulant therapy the following dosage can be applied (if an urgent reversal of oral anticoagulant effect is needed, see Overdose).
Determine the INR one week prior to the scheduled surgery. Discontinue warfarin 1 to 5 days prior to surgery. If the patient is in high risk of thromboembolism, subcutaneous low molecular weight heparin should be given at therapeutic doses. The effect of heparin can be monitored by measuring the prophylactic effect of FXa when the effective therapeutic level is 0.3 to 0.7 anti-FXa activity units/mL.
The extent of warfarin pause depends on the INR value. Discontinue warfarin: 5 days prior to surgery if the INR > 4.0; 3 days prior to surgery if the INR=3.0 to 4.0; 2 days prior to surgery if the INR=2.0 to 3.0.
Determine the INR in the evening before surgery. If INR >1.8, administer 0.5 to 1 mg vitamin K1 intravenously or orally.
Consider the need for unfractionated heparin infusion or prophylactic low molecular weight heparin during the day of surgery.
Continue subcutaneous low molecular weight heparin for 5 to 7 days concomitantly with reintroduced warfarin therapy.
Initiate warfarin with maintenance doses in the evening after minor surgery, and on the day the patient begins enteral nutrition after major surgery.
Overdosage
In mild cases and when the overdosage has been gradual, it usually suffices to stop the warfarin therapy temporarily. If the patient has taken a large amount of warfarin, gastric lavage is not recommended because of the risk of complications. Medicinal charcoal is administered repeatedly to prevent the absorption and enterohepatic circulation of warfarin. If medicinal charcoal is administered, vitamin K must be administered parenterally (IV). If bleeding complications occur, warfarin effect can be reversed by giving vitamin K, coagulation factor concentrate or fresh frozen plasma. If warfarin therapy is indicated also in the future, large doses of vitamin K exceeding 10 mg must be avoided, because after that the patient will be resistant to the effect of warfarin for up to two weeks.
The following scheme can be used in treating overdosage. (See Table 3.)