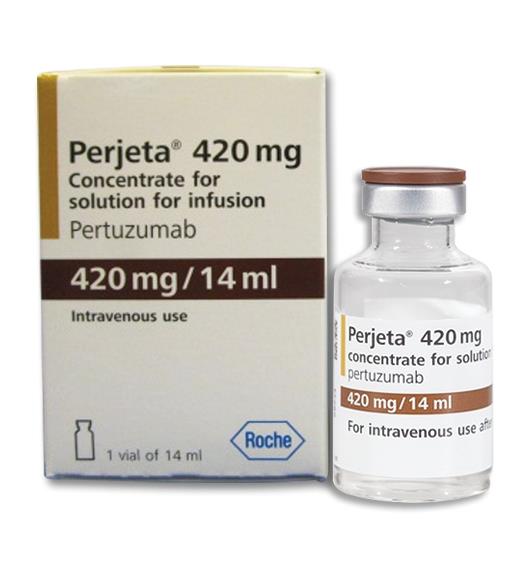 Concise Prescribing Info Full Prescribing Info Contents Description Action Indications/Uses Dosage/Direction for Use Overdosage Contraindications Special Precautions Use In Pregnancy & Lactation Adverse Reactions Drug Interactions Caution For Usage Storage MIMS Class ATC Classification Thai FDA Category Presentation/Packing
Full Prescribing Info
Special Precautions
General: In order to improve traceability of biological medicinal products, the trade name of the administered product should be clearly recorded (or stated) in the patient file.
Left ventricular dysfunction: Decreases in LVEF have been reported with drugs that block HER2 activity, including Perjeta. The incidence of symptomatic left ventricular systolic dysfunction (LVD [congestive heart failure]) was higher in patients treated with Perjeta in combination with Herceptin (trastuzumab) and chemotherapy compared with Herceptin and chemotherapy. Patients who have received prior anthracyclines or prior radiotherapy to the chest area may be at higher risk of decreased LVEF. The majority of cases of symptomatic heart failure reported in the adjuvant setting were in patients who had received anthracycline-based chemotherapy (see Adverse Reactions).
Perjeta has not been studied in patients with: a pretreatment LVEF value of ≤50%; a prior history of congestive heart failure (CHF); decreases in LVEF to <50% during prior Herceptin (trastuzumab) adjuvant therapy; conditions that could impair left ventricular function such as uncontrolled hypertension, recent myocardial infarction, serious cardiac arrhythmia requiring treatment or a cumulative prior anthracycline exposure to >360mg/m2 of doxorubicin or its equivalent.
Assess LVEF prior to initiation of Perjeta and at regular intervals during treatment to ensure that LVEF is within normal limits (see Table 6 as follows). If the LVEF declines as indicated in Table 6 and has not improved, or has declined further at the subsequent assessment, discontinuation of Perjeta and Herceptin (trastuzumab) should be strongly considered, unless the benefits for the individual patient are deemed to outweigh the risks. (See Table 6 as follows.)

Infusion-related reactions: Perjeta has been associated with infusion-related reactions, including events with fatal outcomes (see Adverse Reactions). Close observation of the patient during and for 60 minutes, after the first infusion and during and for 30 minutes following subsequent infusions of Perjeta is recommended. If a significant infusion-related reaction occurs, the infusion should be slowed down or interrupted and appropriate medical therapies should be administered. Patients should be evaluated and carefully monitored until complete resolution of signs and symptoms. Permanent discontinuation should be considered in patients with severe infusion reactions. This clinical assessment should be based on the severity of the preceding reaction and response to administered treatment for the adverse reaction (see Dosage & Administration).
Hypersensitivity reactions/anaphylaxis: Patients should be observed closely for hypersensitivity reactions. Severe hypersensitivity, including anaphylaxis, has been observed in patients treated with Perjeta (see Adverse Reactions). Medications to treat such reactions, as well as emergency equipment, should be available for immediate use. Perjeta is contraindicated in patients with known hypersensitivity to pertuzumab or to any of its excipients (see Contraindications).
Drug Abuse and Dependence: No data to report.
Effects on the Ability to Drive or Use Machinery: No studies on the effects on the ability to use machines have been performed.
Renal Impairment: (See Dosage & Administration and Pharmacology: Pharmacokinetics: Pharmacokinetics in Special Populations under Actions).
Hepatic Impairment: The safety and efficacy of Perjeta have not been studied in patients with hepatic impairment.
Females and Males of Reproductive Potential: Contraception: Women of Child-bearing potential including those who are partners of male patients should use effective contraception while receiving Perjeta and for 6 months following the last dose of Perjeta.
Use in Children: The safety and efficacy of Perjeta in children and adolescents below 18 years of age have not been established.
Use in the Elderly: No overall differences in efficacy and safety of Perjeta were observed in patients ≥65 and <65 years of age with the exception of diarrhea, which had an increased incidence in patients ≥65 years of age. (See Dosage & Administration.)