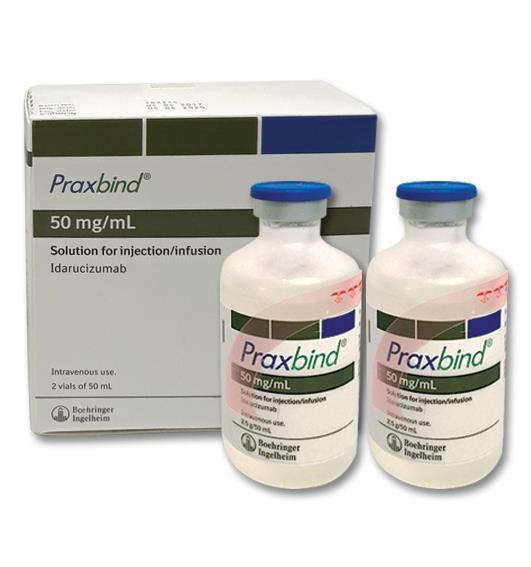 Concise Prescribing Info Full Prescribing Info Contents Description Action Indications/Uses Dosage/Direction for Use Overdosage Contraindications Special Precautions Use In Pregnancy & Lactation Adverse Reactions Drug Interactions Caution For Usage Storage MIMS Class ATC Classification Thai FDA Category Presentation/Packing
Full Prescribing Info
Action
Pharmacotherapeutic Group: All other therapeutic products, antidotes. ATC Code: V03AB37.
Pharmacology: Pharmacodynamics: Mechanism of Action: Idarucizumab is a specific reversal agent for dabigatran. It is a humanized monoclonal antibody fragment (Fab) that binds to dabigatran with very high affinity, approximately 300-fold more potent than the binding affinity of dabigatran for thrombin. The idarucizumab-dabigatran complex is characterised by a rapid on-rate and extremely slow off-rate resulting in a very stable complex. Idarucizumab potently and specifically binds to dabigatran and its metabolites and neutralises their anticoagulant effect.
Pharmacodynamic effects: The pharmacodynamics of idarucizumab after administration of dabigatran etexilate were investigated in 141 subjects in Phase I studies, of which data for a representative subgroup of 6 healthy subjects aged 45 to 64 years receiving a dose of 5 g as intravenous infusion are presented. The median peak dabigatran exposure in the investigated healthy subjects was in the range of a twice daily administration of 150 mg dabigatran etexilate in patients.
Effect of idarucizumab on the exposure and anticoagulant activity of dabigatran: Immediately after the administration of idarucizumab, the plasma concentrations of unbound dabigatran were reduced by more than 99 %, resulting in levels with no anticoagulant activity.
The majority of the patients showed sustained reversal of dabigatran plasma concentrations up to 12 hours (>90%). In a subset of patients, recurrence of plasma levels of unbound dabigatran and concomitant elevation of clotting tests was observed, possibly due to re-distribution of dabigatran from the periphery. This occurred 2-24 hours after administration of idarucizumab mainly at timepoints ≥12 hours. (See Figure 1.)

Dabigatran prolongs the clotting time of coagulation markers such as diluted Thrombin Time (dTT), Thrombin Time (TT), activated Partial Thromboplastin Time (aPTT) and Ecarin Clotting Time (ECT), which provide an approximate indication of the anticoagulation intensity. A value in the normal range after administration of idarucizumab indicates that a patient is no longer anticoagulated. A value above the normal range may reflect residual active dabigatran or other clinical conditions e.g., presence of other drugs or transfusion coagulopathy. These tests were used to assess the anticoagulant effect of dabigatran. A complete and sustained reversal of dabigatran-induced clotting time prolongation was observed immediately after the idarucizumab infusion, lasting over the entire observation period of at least 24 h. (See Figures 2 and 3.)

Thrombin generation parameters: Dabigatran exerts pronounced effects on parameters of the endogenous thrombin potential (ETP). Idarucizumab treatment normalised both thrombin lag time ratio and time to peak ratio to baseline levels as determined 0.5 to 12 hours after the end of the idarucizumab infusion. Idarucizumab alone has shown no procoagulant effect measured as ETP. This suggests that idarucizumab has no prothrombotic effect.
Re-administration of dabigatran etexilate: 24 hours after the idarucizumab infusion, re-administration of dabigatran etexilate resulted in expected anticoagulant activity.
Immunogenicity: Serum samples from 283 subjects (224 treated with idarucizumab) were tested for antibodies to idarucizumab before and after treatment.
Pre-existing antibodies with cross-reactivity to idarucizumab were detected in approximately 13 % (36/283) of the subjects. No impact on the pharmacokinetics or the reversal effect of idarucizumab or hypersensitivity reactions were observed in these subjects.
Treatment-emergent anti-idarucizumab antibodies with low titers were observed in 4 % (9/224) of the subjects suggesting a low immunogenic potential of idarucizumab. In a subgroup of 6 subjects, idarucizumab was administered a second time, two months after the first administration. No anti-idarucizumab antibodies were detected in these subjects prior to the second administration. In one subject, treatment-emergent anti-idarucizumab antibodies were detected after the second administration.
Preclinical pharmacodynamics: A trauma model in pigs was performed using a blunt liver injury after dosing with dabigatran to achieve supratherapeutic concentrations of about 10-fold of human plasma levels. Idarucizumab effectively and rapidly reversed the life-threatening bleeding within 15 min after the injection. All pigs survived at idarucizumab doses of approximately 2.5 and 5 g. Without idarucizumab, the mortality in the anticoagulated group was 100 %.
The European Medicines Agency has deferred the obligation to submit the results of studies with Praxbind in one or more subsets of the paediatric population in the prevention and treatment of dabigatran associated haemorrhage (see Dosage & Administration for information on paediatric use).
Clinical efficacy and safety: Three randomised, double-blind, placebo-controlled Phase I studies in 283 subjects (224 treated with idarucizumab) were conducted to assess the safety, efficacy, tolerability, pharmacokinetics and pharmacodynamics of idarucizumab, given alone or after administration of dabigatran etexilate. The investigated population consisted of healthy subjects and subjects exhibiting specific population characteristics covering age, body weight, race, sex and renal impairment. In these studies the doses of idarucizumab ranged from 20 mg to 8 g and the infusion times ranged from 5 minutes to 1 hour.
Representative values for pharmacokinetic and pharmacodynamics parameters were established on the basis of healthy subjects aged 45-64 years receiving 5 g idarucizumab (see Pharmacodynamics and Pharmacokinetics in this section).
A prospective, open-label, non-randomized, uncontrolled study (RE-VERSE AD) is currently ongoing to investigate the treatment of adult patients who presented with dabigatran-related life-threatening or uncontrolled bleeding (Group A) or who required emergency surgery or urgent procedures (Group B). The primary endpoint was the maximum percentage reversal of the anticoagulant effect of dabigatran within 4 hours after the administration of idarucizumab, based on central laboratory determination of dilute thrombin time (dTT) or ecarin clotting time (ECT). A key secondary endpoint is the restoration of haemostasis.
An interim analysis of RE-VERSE AD included data for 123 patients: 66 patients with serious bleeding (Group A) and 57 requiring an urgent procedure (Group B). Approximately half of the patients in each group were male. The median age was 77 years and the median creatinine clearance was 61 mL/min. Approximately 68% of patients in Group A and 63% of patients in Group B had been treated with dabigatran 110 mg twice daily. Results of central laboratory evaluations were available for a subset of 90 patients (51 in Group A, 39 in Group B).
Most patients (>89%), in both Groups A and B, achieved complete reversal of the anticoagulant effect of dabigatran as measured by dTT or ECT in the first 4 hours after administration of 5 g idarucizumab. Reversal effects were evident immediately after administration. (See Figures 4 and 5.)

Restoration of haemostasis was achieved in 91% of evaluable patients who had serious bleeding and normal haemostasis was observed in 92% of patients who required an urgent procedure.
Of the total 123 patients, 26 patients died; each of these deaths could be attributed either as a complication of the index event or associated with co-morbidities. Thrombotic events were reported in 5 patients, none of which were on antithrombotic therapy at the time of the event, and in each of these cases, the thrombotic event could be attributed to the underlying medical condition of the patient. Mild symptoms of potential hypersensitivity (pyrexia, bronchospasm, hyperventilation, rash or pruritus) were reported. A causal relationship to idarucizumab could not be established. Further adverse events, reported in greater than or equal to 5% of patients, were hypokalemia (9/123; 7%), delirium (9/123; 7%), constipation (8/123; 7%), pyrexia (7/123; 6%), pneumonia (7/123; 6%).
Pharmacokinetics: The pharmacokinetics of idarucizumab were investigated in 224 subjects in Phase I studies, of which data for a representative subgroup of 6 healthy subjects aged 45 to 64 years receiving a dose of 5 g as intravenous infusion are presented.
Distribution: Idarucizumab exhibited multiphasic disposition kinetics and limited extravascular distribution. Following the intravenous infusion of a 5 g dose, the geometric mean volume of distribution at steady state (Vss) was 8.9 L (geometric coefficient of variation (gCV) 24.8 %).
Biotransformation: Several pathways have been described that may contribute to the metabolism of antibodies. All of these pathways involve biodegradation of the antibody to smaller molecules, i.e. small peptides or amino acids, which are then reabsorbed and incorporated in the general protein synthesis.
Elimination: Idarucizumab was rapidly eliminated with a total clearance of 47.0 mL/min (gCV 18.4 %), an initial half-life of 47 minutes (gCV 11.4 %) and a terminal half-life of 10.3 h (gCV 18.9 %). After intravenous administration of 5 g idarucizumab, 32.1 % (gCV 60.0 %) of the dose was recovered in urine within a collection period of 6 hours and less than 1 % in the following 18 hours. The remaining part of the dose is assumed to be eliminated via protein catabolism, mainly in the kidney.
After treatment with idarucizumab proteinuria has been observed. The transient proteinuria is a physiologic reaction to renal protein overflow after bolus/short term application of 5g idarucizumab intravenously. The transient proteinuria usually peaked about 4 h after idarucizumab administration and normalised within 12-24 hours. In single cases the transient proteinuria persisted for more than 24 hours.
Patients with renal impairment: In Phase I studies Praxbind has been investigated in subjects with a creatinine clearance ranging from 44 to 213 mL/min. Subjects with a creatinine clearance below 44 mL/min have not been studied in Phase I.
Depending on the degree of renal impairment the total clearance was reduced compared to healthy subjects, leading to an increased exposure of idarucizumab.
Based on pharmacokinetic data from 68 patients with different degrees of renal function (median creatinine clearance 19.2-126 mL/min) it is estimated that mean idarucizumab exposure (AUC 0-24h) increases by 26% in patients with mild (CrCl 60-90 mL/min), by 78% in moderate (30-60 mL/min) and by 199% in severe (0-30 mL/min) renal impairment. Since dabigatran is also excreted primarily via the kidneys, increases in the exposure to dabigatran are also seen with worsening renal function.
Based on these data and the extent of reversal of the anticoagulant effect of dabigatran in patients, renal impairment does not appear to impact the reversal effect of idarucizumab, although the conclusion for patients with severe renal impairment is drawn from only a small subset of patients.
Patients with hepatic impairment: Praxbind has not been studied in patients with hepatic impairment. Antibody fragments are known to be eliminated mainly by proteolytic catabolism in the kidney. An impact of hepatic impairment on the pharmacokinetics of idarucizumab is not expected.
Older people/Sex/Race: Based on population pharmacokinetic analyses, sex, age, and race do not have a clinically meaningful effect on the pharmacokinetics of idarucizumab.
Toxicology: Preclinical safety data: Preclinical data reveal no special hazard for humans based on repeated dose toxicity studies of up to four weeks in rats and two weeks in monkeys. Safety pharmacology studies have demonstrated no effects on the respiratory, central nervous or cardiovascular system.
Studies to evaluate the mutagenic and carcinogenic potential of idarucizumab have not been performed. Based on its mechanism of action and the characteristics of proteins no carcinogenic or genotoxic effects are anticipated.
Studies to assess the potential reproductive effects of idarucizumab have not been performed. No treatment-related effects have been identified in reproductive tissues of either sex during repeat dose intravenous toxicity studies of up to four weeks in the rat and two weeks in monkeys. Additionally, no idarucizumab binding to human reproductive tissues was observed in a tissue cross-reactivity study. Therefore, preclinical results do not suggest a risk to fertility or embryo-fetal development.
No local irritation of the blood vessel was observed after i.v. or paravenous administration of idarucizumab. The idarucizumab formulation did not produce haemolysis of human whole blood in vitro.