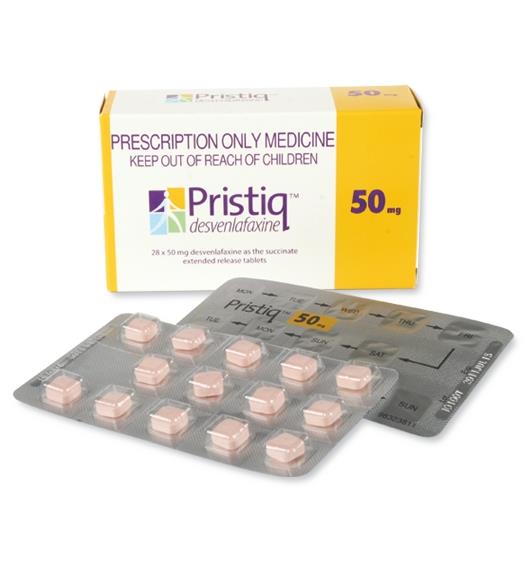 Concise Prescribing Info Full Prescribing Info Contents Description Action Indications/Uses Dosage/Direction for Use Overdosage Contraindications Special Precautions Use In Pregnancy & Lactation Adverse Reactions Drug Interactions Storage MIMS Class ATC Classification Thai FDA Category Presentation/Packing
Full Prescribing Info
Drug Interactions
MAOI: Adverse reactions, some of which were serious, have been reported in patients who have recently been discontinued from an MAOI and started on antidepressants with pharmacological properties similar to desvenlafaxine (SNRIs or SSRIs), or who have recently had SNRI or SSRI therapy discontinued prior to initiation of an MAOI. Concomitant use of desvenlafaxine in patients taking MAOIs is contraindicated (see Precautions).
CNS-Active Agents: The risk of using desvenlafaxine in combination with other CNS-active drugs has not been systematically evaluated. Consequently, caution is advised when desvenlafaxine is taken in combination with other CNS-active drugs.
Serotonin Syndrome: As with other serotonergic agents, serotonin syndrome, a potentially life-threatening condition, may occur with desvenlafaxine treatment, particularly with concomitant use of other agents that may affect the serotonergic neurotransmitter system [including triptans, SSRIs, other SNRIs, lithium, sibutramine, tramadol or St. John's wort (Hypericum perforatum)], with drugs that impair metabolism of serotonin [eg, MAOIs, including linezolid (an antibiotic which is a reversible nonselective MAOI), see Contraindications], or with serotonin precursors (eg, tryptophan supplements). Serotonin syndrome symptoms may include mental status changes, autonomic instability, neuromuscular aberrations and/or gastrointestinal symptoms (see Precautions).
If concomitant treatment of desvenlafaxine with an SSRI, an SNRI or a 5-hydroxytryptamine receptor agonist (triptan) is clinically warranted, careful observation of the patient is advised, particularly during treatment initiation and dose increases. The concomitant use of desvenlafaxine with serotonin precursors (eg, tryptophan supplements) is not recommended (see Precautions).
Ethanol: A clinical trial has shown that desvenlafaxine does not increase the impairment of mental and motor skills caused by ethanol. However, as with all CNS-active drugs, patients should be advised to avoid alcohol consumption while taking desvenlafaxine.
Potential for Other Drugs to Affect Desvenlafaxine: Inhibitors of CYP3A4: CYP3A4 is minimally involved in desvenlafaxine elimination. In a clinical study, ketoconazole (200 mg twice a day) increased the area under the concentration vs time curve (AUC) of desvenlafaxine (400 mg, single dose) by approximately 43%, a weak interaction and Cmax by about 8%. Concomitant use of desvenlafaxine with potent inhibitors of CYP3A4 may result in higher concentrations of desvenlafaxine.
Potential for Desvenlafaxine to Affect Other Drugs: Drugs metabolized by CYP2D6: Clinical trials have shown that desvenlafaxine is a weak inhibitor of CYP2D6 at a dose of 100 mg daily. When desvenlafaxine succinate was administered at a dose of 100 mg daily in conjunction with a single 50-mg dose of desipramine, a CYP2D6 substrate, the AUC of desipramine increased approximately 17%. When 400 mg was administered, the AUC of desipramine increased approximately 90%. Concomitant use of desvenlafaxine with a drug metabolized by CYP2D6 may result in higher concentrations of that drug.
Drugs Metabolized by CYP3A4: In vitro, desvenlafaxine does not inhibit, or induce the CYP3A4 isozymes. In a clinical trial, desvenlafaxine (400 mg daily) decreased the AUC of midazolam (single 4-mg dose), a CYP3A4 substrate, by approximately 31%. Concomitant use of desvenlafaxine with a drug metabolized by CYP3A4 may result in lower exposures to that drug.