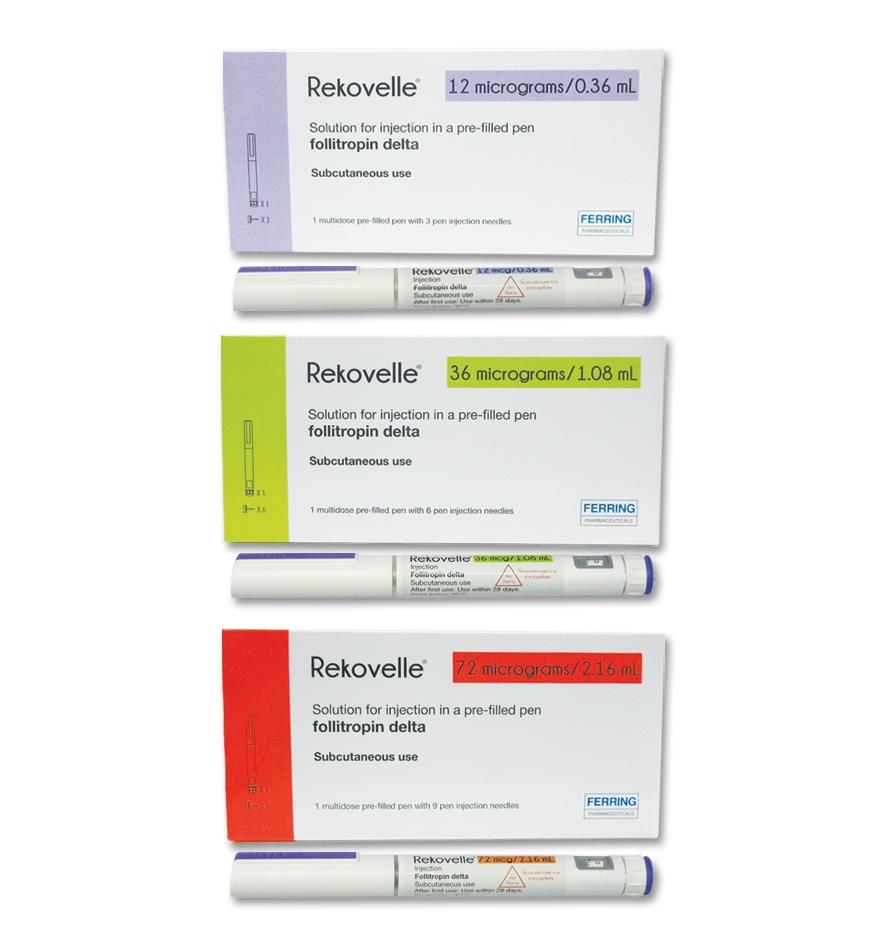 Concise Prescribing Info Full Prescribing Info Contents Description Action Indications/Uses Dosage/Direction for Use Overdosage Contraindications Special Precautions Use In Pregnancy & Lactation Adverse Reactions Drug Interactions Caution For Usage Storage MIMS Class ATC Classification Thai FDA Category Presentation/Packing
Full Prescribing Info
Contents
Follitropin delta.
Description
One pre-filled multidose pen delivers 12 micrograms follitropin delta* in 0.36 mL solution.
One pre-filled multidose pen delivers 36 micrograms follitropin delta* in 1.08 mL solution.
One pre-filled multidose pen delivers 72 micrograms follitropin delta* in 2.16 mL solution.
One mL of solution contains 33.3 micrograms of follitropin delta*
*recombinant human follicle-stimulating hormone (FSH) produced in a human cell line (PER.C6) by recombinant DNA technology.
Excipients/Inactive Ingredients: Phenol, Polysorbate 20, L-methionine, Sodium sulphate decahydrate, Disodium phosphate dodecahydrate, Concentrated phosphoric acid (for pH-adjustment), Sodium hydroxide (for pH-adjustment), Water for injections.
Action
Pharmacotherapeutic group: Sex hormones and modulators of the genital systems, gonadotropins. ATC code: G03GA10.
Pharmacology: Pharmacodynamics: Mechanism of action: The most important effect resulting from parenteral administration of FSH is the development of multiple mature follicles.
Follitropin delta is a recombinant human FSH. The amino acid sequences of the two FSH subunits in follitropin delta are identical to the endogenous human FSH sequences. Because follitropin delta is produced in the human cell line PER.C6, the glycosylation profile is different from follitropin alfa and follitropin beta.
Pharmacodynamic effects: Following daily administration of equal IU doses of REKOVELLE and follitropin alfa as determined in the rat in vivo bioassay (Steelman-Pohley assay), higher ovarian response (i.e. estradiol, inhibin B and follicular volume) was observed in patients after administration of REKOVELLE compared to follitropin alfa. As the rat bioassay might not fully reflect the potency of the FSH in REKOVELLE in humans, REKOVELLE is dosed in micrograms and not in IU.
The number of oocytes retrieved increases with the dose of REKOVELLE and serum AMH concentration. Conversely, increasing body weight leads to a decrease in the number of oocytes retrieved (only clinically relevant for REKOVELLE doses below 12 micrograms).
The resulting REKOVELLE dosing regimen is in Dosage & Administration.
Clinical efficacy and safety: The ESTHER-1 trial was a randomised, assessor-blinded, controlled trial in 1,326 IVF/ICSI patients. The trial compared the individualised dosing regimen of REKOVELLE where the daily dose is established for each patient and fixed throughout stimulation with no adjustments (see Dosage & Administration) to follitropin alfa filled-by-mass at a starting dose of 11 micrograms (150 IU) for the first five days followed by dose adjustments from day 6 of stimulation based on follicular development in a GnRH antagonist protocol. The patients were up to 40 years of age and had regular menstrual cycles presumed to be ovulatory. Single blastocyst transfer on day 5 was compulsory with the exception of patients 38 - 40 years in whom double blastocyst transfer was performed if no good-quality blastocysts were available. The two co-primary endpoints were ongoing pregnancy rate and ongoing implantation rate in the fresh cycle, defined as at least one intrauterine viable fetus 10 - 11 weeks after transfer and number of intrauterine viable fetuses 10 - 11 weeks after transfer divided by number of blastocysts transferred, respectively.
The trial demonstrated that REKOVELLE was at least as effective as follitropin alfa in terms of ongoing pregnancy rate and ongoing implantation rate, as shown in Table 1. (See Table 1.)

The impact of the AMH-based dosing regimen of REKOVELLE was also assessed in secondary endpoints, such as ovarian response and OHSS risk management.
In the overall trial population, the mean number of oocytes retrived was 10.0 ± 5.6 with REKOVELLE (N = 636) in the individualised dosing regimen and 10.4 ± 6.5 with follitropin alfa (N = 643) at a starting dose of 150 IU followed by dose adjustments.
Among patients with AMH ≥ 15 pmol/L, the ovarian response with REKOVELLE (N = 355) and follitropin alfa (N = 353), respectively, was as follows: mean number of oocytes retrived 11.6 ± 5.9 and 13.3 ± 6.9, and proportion of patients with ≥ 20 oocytes 10.1% (36/355) and 15.6 (55/353).
In ovulatory patients with polycystic ovaries, the incidence of early moderate/severe OHSS and/or preventive interventions for early OHSS was 7.7% with REKOVELLE and 26.7% with follitropin alfa.
Safety – immunogenicity: Anti-FSH antibodies were measured pre-dosing and post-dosing in patients undergoing up to three repeated treatment cycles with REKOVELLE (665 patients in cycle 1 in the ESTHER 1 trial as well as 252 patients in cycle 2 and 95 patients in cycle 3 in the ESTHER 2 trial). The incidence of anti-FSH antibodies after treatment with REKOVELLE was 1.1% in cycle 1, 0.8% in cycle 2 and 1.1% in cycle 3. These rates were similar to the incidence of pre-existing anti-FSH antibodies before exposure to REKOVELLE in cycle 1 which was 1.4%, and comparable to the incidences of anti-FSH antibodies after treatment with follitropin alfa. In all patients with anti-FSH antibodies, titres were undetectable or very low and without neutralising capacity. Repeated treatment with REKOVELLE of patients with pre-existing or treatment-induced anti-FSH antibodies did not increase the antibody titre, was not associated with decreased ovarian response, and did not induce immune-related adverse events.
There is no clinical trial experience with REKOVELLE in the long GnRH agonist protocol.
Pharmacokinetics: The pharmacokinetic profile of follitropin delta has been investigated in healthy female subjects and in IVF/ICSI patients undergoing COS. Following repeated daily subcutaneous administrations, REKOVELLE reaches steady-state within 6 to 7 days with a threefold higher concentration compared with the concentration after the first dose. Circulating levels of follitropin delta are inversely related to the body weight, which supports individualized dosing based on body weight. Follitropin delta leads to greater exposure than follitropin alfa.
Absorption: After daily subcutaneous administration of REKOVELLE, the time to maximum serum concentration is 10 hours. The absolute bioavailability is about 64%.
Distribution: The apparent volume of distribution is about 25 L after subcutaneous administration and the volume of distribution at steady state is about 9 L after intravenous administration. Within the therapeutic dose range, exposure to follitropin delta increases proportionally with the dose.
Elimination: Following intravenous administration, the apparent clearance of follitropin delta is 0.6 L/h and the clearance after intravenous is 0.3 L/h. The terminal elimination half-life after single subcutaneous administration is 40 hours and after multiple subcutaneous administration is 28 hours. The apparent clearance for follitropin delta is low, i.e. 0.6 L/h after multiple subcutaneous administration, leading to high exposure. Follitropin delta is expected to be eliminated similarly to other follitropins, i.e. mainly by the kidneys. The fraction of follitropin delta excreted unchanged in the urine was estimated to 9%.
Toxicology: Preclinical safety data: Non-clinical data reveal no special hazard for humans based on conventional studies of safety pharmacology, repeated dose toxicity and local tolerance. The overdose of follitropin delta resulted in pharmacological or exaggerated pharmacological actions. Follitropin delta had a negative effect on fertility and early embryonic development in rats when administered in doses ≥0.8 micrograms/kg/day which is above the recommended maximal dose in humans. The relevance of these findings for the clinical use of REKOVELLE is limited.
Indications/Uses
Controlled ovarian stimulation for the development of multiple follicles in women undergoing assisted reproductive technologies (ART) such as an in vitro fertilisation (IVF) or intracytoplasmic sperm injection (ICSI) cycle.
There is no clinical trial experience with REKOVELLE in the long GnRH agonist protocol (see Pharmacology: Pharmacodynamics under Actions).
Dosage/Direction for Use
Treatment should be initiated under the supervision of a physician experienced in the treatment of fertility problems.
Posology: The posology of REKOVELLE is individualised for each patient and aims to obtain an ovarian response which is associated with a favourable safety/efficacy profile, i.e. aims to achieve an adequate number of oocytes retrieved and reduce the interventions to prevent ovarian hyperstimulation syndrome (OHSS). REKOVELLE is dosed in micrograms (see Pharmacology: Pharmacodynamics under Actions). The dosing regimen is specific for REKOVELLE and the microgram dose cannot be applied to other gonadotropins.
For the first treatment cycle, the individual daily dose will be determined on the basis of the woman's serum anti-Müllerian hormone (AMH) concentration and her body weight. The dose should be based on a recent determination of AMH (i.e. within the last 12 months) measured by the following diagnostic test from Roche: ELECSYS AMH Plus immunoassay (see Precautions). The individual daily dose is to be maintained throughout the stimulation period. For women with AMH <15 pmol/L the daily dose is 12 micrograms, irrespective of body weight. For women with AMH ≥15 pmol/L the daily dose decreases from 0.19 to 0.10 micrograms/kg by increasing AMH concentration (Table 2). The dose is to be rounded off to the nearest 0.33 micrograms to match the dosing scale on the injection pen. The maximum daily dose for the first treatment cycle is 12 micrograms.
For calculation of the REKOVELLE dose, the body weight is to be measured without shoes and overcoat just prior to start of stimulation. (See Table 2.)

Description of selected adverse reactions: OHSS is an intrinsic risk of the ovarian stimulation. Known gastrointestinal symptoms associated with OHSS include abdominal pain, discomfort, and distension, nausea, vomiting and diarrhoea. Ovarian torsion and thromboembolic events are known to be rare complications of ovarian stimulation treatment (see Precautions).
Immunogenicity in terms of development of anti-FSH antibodies is a potential risk of gonadotropin therapy (see Pharmacology: Pharmacodynamics under Actions).
View ADR Monitoring Form
Drug Interactions
No interaction studies have been performed with REKOVELLE. Clinically significant interactions with other medicinal products have neither been reported during REKOVELLE therapy, nor are expected.
Caution For Usage
Incompatibilities: Not applicable.
Special precautions for disposal and other handling: The solution should not be administered if it contains particles or is not clear.
The instructions for use of the pen must be followed. Discard used needles immediately after injection.
Storage
Store in a refrigerator (2°C - 8°C).
Do not freeze.
Before first use, store in the original package in order to protect from light.
For storage conditions after first use of the medicinal product, see as follows.
Shelf-life: 3 years.
In use: 28 days when stored at or below 30°C.
MIMS Class
Combined Sex Hormones
ATC Classification
G03GA10 - follitropin delta ; Belongs to the class of gonadotropins. Used as ovulation stimulants.