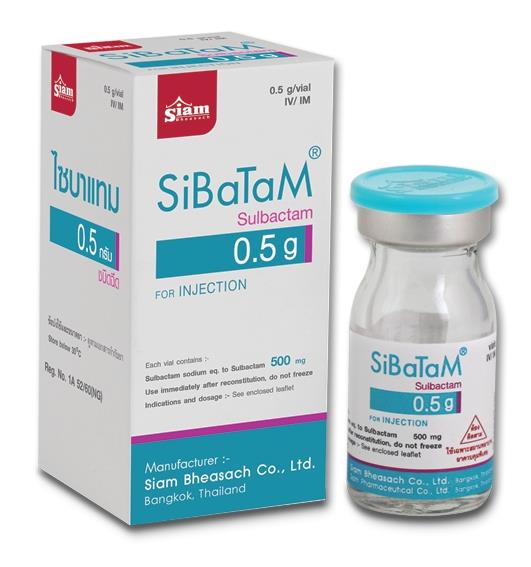 Concise Prescribing Info Full Prescribing Info Contents Description Action Indications/Uses Dosage/Direction for Use Overdosage Contraindications Warnings Special Precautions Use In Pregnancy & Lactation Adverse Reactions Drug Interactions Storage MIMS Class ATC Classification Thai FDA Category Presentation/Packing
The information highlighted (if any) are the most recent updates for this brand.
Full Prescribing Info
Action
Pharmacology: Pharmacodynamics: Sulbactam, a penicillanic acid sulfone, is a β-lactamases inhibitor with high affinity for and binds to certain β-lactamases leading to the formation of a β-lactamases–Sulbactam complex that irreversibly inhibits the activity of the enzyme and allows synergistic antibacterial effect of the β-lactam antibiotics which is co-administered. Sulbactam also has its intrinsic antimicrobial activity, which is related to its affinity for the penicillin-binding protein. In vitro, Sulbactam concentrations of 0.1-4 mcg/mL inhibit some strains of Acinetobacter spp., Neisseria meningitidis, Neisseria gonorrhoeae, Moraxella catarrhalis. In addition, Sulbactam concentrations of 8-16 mcg/ml inhibit some strains of Bacteroides and Legionella.
Pharmacokinetics: Sulbactam sodium is not absorbed appreciably from the GI tract and must be given parenterally. Sulbactam reportedly distributes into certain tissue and fluids (e.g. bile, blister fluid, peritoneal fluid, intestinal mucosa). Sulbactam distribution may vary and appears to depend on the degree of local inflammation. In adult with normal renal function, the apparent volume of distribution at steady state of Sulbactam is 0.24-0.4 L/kg, and the apparent volume of distribution of Sulbactam at steady state in infants and children is 0.31-0.38 L/kg. In adult and children, CSF concentrations of the drugs generally are higher in patients with inflamed than in those with uninflamed meninges. Sulbactam is approximately 38% bound to serum proteins. Sulbactam crosses the placenta and concentrations in umbilical cord blood may be similar to serum concentrations. Sulbactam is distributed into milk in low concentrations. In lactating women who received 500 mg or 1 g doses of Sulbactam by IV infusion over 20 minutes every 6 hours, concentrations of the drug in milk average 0.52 mcg/ml in samples obtained at random intervals between the first and thirteenth doses. In healthy adults with normal renal function, Sulbactam has a distribution half-life of about 15 minutes and elimination half-life of about 1 hour.
In a study in healthy geriatric adults 65-85 years of age with renal function normal for their age, the elimination half-life of Sulbactam averaged 1.6 hours. In infants and children younger than 12 years of age, Sulbactam has an elimination half-life of 0.92-1.9 hours. The major route of elimination of Sulbactam is glomerular filtration and tubular secretion. Only small amount of the drug are eliminated in feces and bile. About 75-85% of a parenteral dose is excreted unchanged in urine within 8 hours. Serum concentration of Sulbactam is higher and the half-life of the drugs prolonged in patients with renal impairment. In healthy adult with normal renal function, renal clearance of Sulbactam is 169-204 ml/minute.