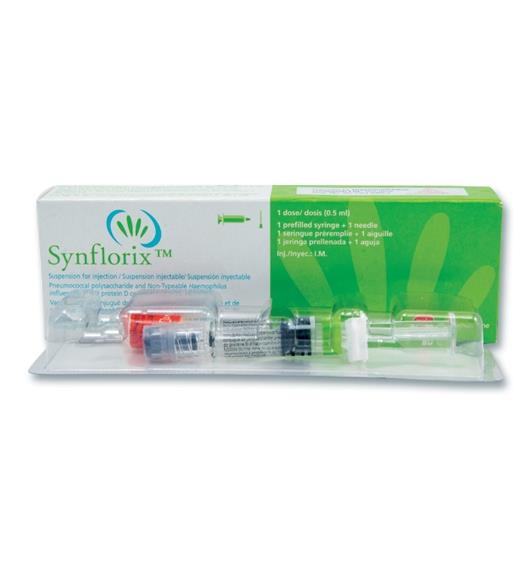 Safety of Synflorix was assessed in 83 HIV positive infants, 101 HIV negative infants born from an HIV positive mother and 150 children with SCD. Results suggest comparable reactogenicity and safety profile of Synflorix between these high risk groups and healthy children.
View ADR Monitoring Form
Drug Interactions
Synflorix can be given concomitantly with any of the following monovalent or combination vaccines (including DTPa-HBV-IPV/Hib and DTPw-HBV/Hib): Diphtheria-tetanus-acellular pertussis vaccine (DTPa), hepatitis B vaccine (HBV), inactivated polio vaccine (IPV), Haemophilus influenzae type b vaccine (Hib), diphtheria-tetanus-whole cell pertussis vaccine (DTPw), measles-mumps-rubella vaccine (MMR), varicella vaccine, meningococcal serogroup C conjugate vaccine (CRM197 and TT conjugates), meningococcal serogroups A, C, W-135 and Y conjugate vaccine (MenACWY-TT), oral polio vaccine (OPV) and rotavirus vaccine. Different injectable vaccines should always be given at different injection sites.
Clinical studies demonstrated that the immune responses and the safety profiles of the co-administered vaccines were unaffected, with the exception of the inactivated poliovirus type 2 response (seroprotection ranging from 78% to 100% across studies) and MenACWY-TT vaccine when co-administered with a booster dose of Synflorix following a 3 doses primary series (lower antibody geometric mean concentration (GMC) and opsonophagocytic assay geometric mean titre (OPA GMT) for pneumococcal serotype 18C only). Enhancement of antibody response to Hib-TT conjugate, diphtheria and tetanus antigens was observed. The clinical relevance of the above observations is unknown.
As with other vaccines, it may be expected that in patients receiving immunosuppressive treatment, an adequate response may not be elicited.
Caution For Usage
Instructions for Use, Handling and Disposal: A fine white deposit with a clear colourless supernatant may be observed upon storage of the syringe/vial. This does not constitute a sign of deterioration.
The content of the syringe/vial should be inspected visually both before and after shaking for any foreign particulate matter and/or abnormal physical appearance prior to administration.
In the event of either being observed, discard the vaccine.
The vaccine should be well shaken before use.
Any unused product or waste material should be disposed of in accordance with local requirements.
Instructions for administration of the vaccine presented in pre-filled syringe: Holding the syringe barrel in one hand (avoid holding the syringe plunger), unscrew the syringe cap by twisting it anticlockwise.
To attach the needle to the syringe, twist the needle clockwise into the syringe until you feel it lock.
Remove the needle protector, which on occasion can be a little stiff.
Administer the vaccine.
Incompatibilities: In the absence of compatibility studies, this medicinal product must not be mixed with other medicinal products.
Storage
Store at +2°C to +8°C (in a refrigerator). Do not freeze. Protect from light.
Shelf-Life: The expiry date is indicated on the label and packaging.
Synflorix should be administered as soon as possible after being removed from the refrigerator. However, stability data generated indicate that Synflorix remains stable and can be administered when the vaccine has been stored outside the refrigerator for up to 72 hours at temperatures between 8°C and 25°C.
After first opening of the multidose vial, immediate use is recommended. If not used immediately, the vaccine should be stored in a refrigerator (+2°C - +8°C). If not used within 6 hours it should be discarded.
MIMS Class
Vaccines, Antisera & Immunologicals
ATC Classification
J07AL52 - pneumococcus purified polysaccharides antigen and haemophilus influenzae, conjugated ; Belongs to the class of pneumococcal vaccines.