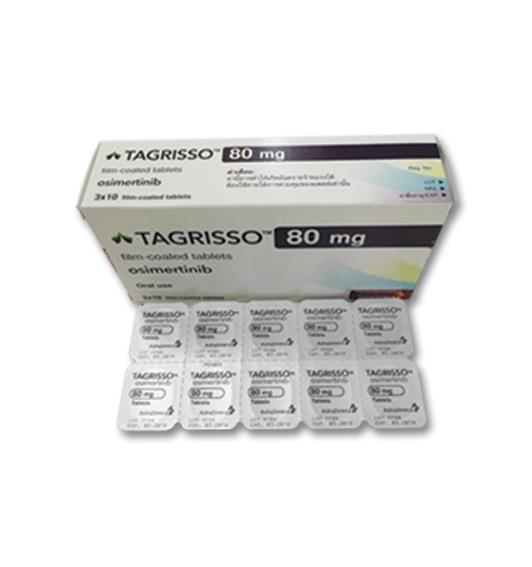 Concise Prescribing Info Full Prescribing Info Contents Description Action Indications/Uses Dosage/Direction for Use Overdosage Contraindications Special Precautions Use In Pregnancy & Lactation Adverse Reactions Drug Interactions Caution For Usage Storage MIMS Class ATC Classification Thai FDA Category Presentation/Packing
The information highlighted (if any) are the most recent updates for this brand.
Full Prescribing Info
Special Precautions
Assessment of EGFR mutation status: When considering the use of TAGRISSO as an adjuvant therapy after complete tumour resection in patients with NSCLC, EGFR mutation positive status (exon 19 deletions or exon 21 (L858R) substitution mutations) indicates treatment eligibility. A validated test should be performed in a clinical laboratory using tumour tissue DNA from biopsy or surgical specimen.
When considering the use of TAGRISSO as a treatment for locally advanced or metastatic NSCLC, it is important that the EGFR mutation positive status is determined. A validated test should be performed using either tumour DNA derived from a tissue sample or circulating tumour DNA (ctDNA) obtained from a plasma sample.
Only robust, reliable and sensitive tests with demonstrated utility for the determination of EGFR mutation status of tumour derived DNA (from a tissue or a plasma sample) should be used.
Positive determination of EGFR mutation status using either a tissue-based or plasma-based test indicates eligibility for treatment with TAGRISSO. However, if a plasma-based ctDNA test is used and the result is negative, it is advisable to follow-up with a tissue test wherever possible due to the potential for false negative results using a plasma-based test.
Interstitial Lung Disease (ILD): Severe, life-threatening or fatal Interstitial Lung Disease (ILD) or ILD-like adverse reactions (e.g. pneumonitis) have been observed in patients treated with TAGRISSO in clinical studies. Most cases improved or resolved with interruption of treatment. Patients with a past medical history of ILD, drug-induced ILD, radiation pneumonitis that required steroid treatment, or any evidence of clinically active ILD were excluded from clinical studies (see Adverse Reactions).
Interstitial Lung Disease (ILD) or ILD-like adverse reactions (e.g. pneumonitis) were reported in 3.7% and were fatal in 0.3% of the 1479 patients who received TAGRISSO in ADAURA, FLAURA and AURA studies.
The incidence of ILD was 10.9% in patients of Japanese ethnicity, 1.6% in patients of Asian ethnicity and 2.5% in non-Asian patients (see Adverse Reactions).
Careful assessment of all patients with an acute onset and/or unexplained worsening of pulmonary symptoms (dyspnoea, cough, fever) should be performed to exclude ILD. Treatment with this medicinal product should be interrupted pending investigation of these symptoms. If ILD is diagnosed, TAGRISSO should be permanently discontinued and appropriate treatment initiated as necessary.
Erythema multiforme and Stevens-Johnson syndrome: Case reports of Erythema multiforme (EM) and Stevens-Johnson syndrome (SJS) have been uncommonly and rarely reported, respectively, in association with TAGRISSO treatment. Before initiating treatment, patients should be advised of signs and symptoms of EM and SJS. If signs and symptoms suggestive of EM develop, close patient monitoring and drug interruption or discontinuation of TAGRISSO should be considered. If signs and symptoms suggestive of SJS appear, TAGRISSO should be interrupted or discontinued immediately.
QTc interval prolongation: QTc interval prolongation occurs in patients treated with TAGRISSO. QTc interval prolongation may lead to an increased risk for ventricular tachyarrhythmias (e.g. torsade de pointes) or sudden death. No arrhythmic events were reported in FLAURA or AURA studies (see Adverse Reactions). Patients with clinically important abnormalities in rhythm and conduction as measured by resting electrocardiogram (ECG) (e.g. QTc interval greater than 470 ms) were excluded from these studies (see Adverse Reactions).
When possible, the use of osimertinib in patients with congenital long QT syndrome should be avoided. Periodic monitoring with electrocardiograms (ECGs) and electrolytes should be considered in patients with congestive heart failure, electrolyte abnormalities, or those who are taking medicinal products that are known to prolong the QTc interval. Treatment should be withheld in patients who develop a QTc interval greater than 500 msec on at least 2 separate ECGs until the QTc interval is less than 481 msec or recovery to baseline if the QTc interval is greater than or equal to 481 msec, then resume TAGRISSO at a reduced dose as described in Table 10. Osimertinib should be permanently discontinued in patients who develop QTc interval prolongation in combination with any of the following: Torsade de pointes, polymorphic ventricular tachycardia, signs/symptoms of serious arrhythmia.
Changes in cardiac contractility: Across clinical trials, Left Ventricular Ejection Fraction (LVEF) decreases greater than or equal to 10 percentage points and a drop to less than 50% occurred in 3.2% (40/1233) of patients treated with TAGRISSO who had baseline and at least one follow-up LVEF assessment. In a placebo controlled trial (ADAURA), 1.6% (5/312) of patients treated with TAGRISSO and 1.5% (5/331) of patients treated with placebo experienced LVEF decreases greater than or equal to 10 percentage points and a drop to less than 50%.
Based on the available clinical trial data, it is not possible to determine a causal relationship between effects on changes in cardiac contractility and TAGRISSO. In patients with cardiac risk factors and those with conditions that can affect LVEF, cardiac monitoring, including an assessment of LVEF at baseline and during treatment, should be considered. In patients who develop relevant cardiac signs/symptoms during treatment, cardiac monitoring including LVEF assessment should be considered.
Keratitis: Keratitis was reported in 0.7% (n=10) of the 1479 patients treated with TAGRISSO in the ADAURA, FLAURA and AURA studies. Patients presenting with signs and symptoms suggestive of keratitis such as acute or worsening: eye inflammation, lacrimation, light sensitivity, blurred vision, eye pain and/or red eye should be referred promptly to an ophthalmology specialist (see Dosage & Administration).
Age and body weight: Elderly patients (>65 years) or patients with low body weight (<50 kg) may be at increased risk of developing adverse events of Grade 3 or higher. Close monitoring is recommended in these patients (see Adverse Reactions).
Sodium: This medicine contains < 1 mmol sodium (23 mg) per 40 mg or 80 mg tablet, that is to say essentially "sodium-free".
Effects on ability to drive and use machines: TAGRISSO has no or negligible influence on the ability to drive and use machines.