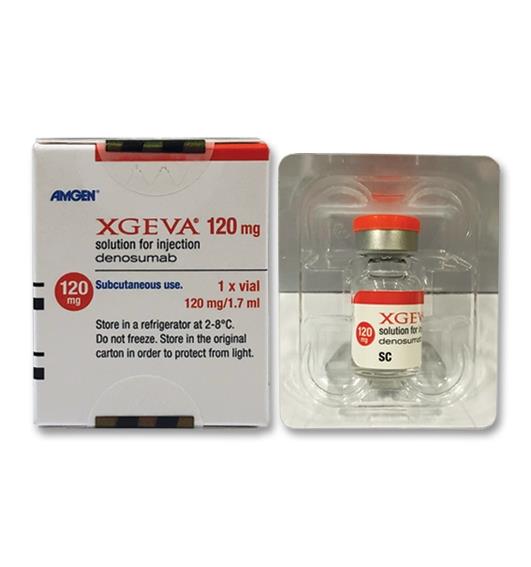 Effect on pain: Pain analyses included evaluation of changes from baseline in BPI-SF worst pain score; evaluations of time to pain worsening, moderate or severe pain, or pain improvement; and the proportions of subjects meeting these criteria. In an ad-hoc analysis of the combined dataset, the median time to worsening pain (> 4-point worst pain score and ≥ 2-point increase from baseline) was longer for XGEVA compared to zoledronic acid (65 versus 59 days and 181 versus 169 days, respectively). In an additional ad-hoc subgroup analysis in patients with mild or no pain at baseline, time to worsening pain (> 4-point worst pain score) was delayed in the XGEVA group compared to the zoledronic acid treatment group (198 versus 143 days). The time to pain improvement (i.e., ≥ 2-point decrease from baseline in BPI-SF worst pain score) was similar for denosumab and zoledronic acid in each study and the integrated analyses.
Overall survival and disease progression: Disease progression was similar between XGEVA and zoledronic acid in all three studies and in the pre-specified analysis of all three studies combined.
In all three studies overall survival was balanced between XGEVA and zoledronic acid in patients with advanced malignancies involving bone: patients with breast cancer (hazard ratio and 95% CI was 0.95 [0.81, 1.11]), patients with prostate cancer (hazard ratio and 95% CI was 1.03 [0.91, 1.17]), and patients with other solid tumors or multiple myeloma (hazard ratio and 95% CI was 0.95 [0.83, 1.08]). An ad-hoc analysis in study 2 (patients with other solid tumors or multiple myeloma) examined overall survival for the 3 tumor types used for stratification (non-small cell lung cancer, multiple myeloma, and other). Overall survival was longer for XGEVA in non-small cell lung cancer (hazard ratio [95% CI] of 0.79 [0.65, 0.95]; n = 702) and longer for zoledronic acid in multiple myeloma (hazard ratio [95% CI] of 2.26 [1.13, 4.50]; n = 180) and similar between the XGEVA and zoledronic acid in other tumor types (hazard ratio [95% CI] of 1.08 (0.90, 1.30); n = 894). This study did not control for prognostic factors and anti-neoplastic treatments for multiple myeloma. In a combined pre-specified analysis from studies 1, 2 and 3, overall survival was similar between XGEVA and zoledronic acid (hazard ratio and 95% CI 0.99 [0.91, 1.07]).
Multiple Myeloma: In Study 4, XGEVA was evaluated in an international, randomized (1:1), double-blind, active-controlled study comparing XGEVA with zoledronic acid in patients with newly diagnosed multiple myeloma.
In this study, 1,718 multiple myeloma patients with at least 1 bone lesion were randomized to receive 120 mg XGEVA subcutaneously every 4 weeks or 4 mg zoledronic acid intravenously (IV) every 4 weeks (dose adjusted for renal impairment and patients with creatinine clearance less than 30 mL/min were excluded based on Zometa prescribing information). The primary outcome measure was demonstration of non-inferiority of time to first skeletal-related event (SRE) as compared to zoledronic acid. Secondary outcome measures included superiority of time to first SRE, superiority of time to first and subsequent SRE, and overall survival. An SRE was defined as any of the following: pathologic fracture (vertebral or non-vertebral), radiation therapy to bone (including the use of radioisotopes), surgery to bone, or spinal cord compression.
In this study, randomization was stratified by intent to undergo autologous peripheral blood stem cell (PBSC) transplantation (yes or no), the anti-myeloma agent being utilized/planned to be utilized in first-line therapy [novel therapy-based or non-novel therapy-based (novel therapies include bortezomib, lenalidomide, or thalidomide)], stage at diagnosis (International Staging System I or II or III), previous SRE (yes or no), and region (Japan or other countries). Across both study arms, 54.5% of patients intended to undergo autologous PBSC transplantation, 95.8% patients utilized/planned to utilize a novel anti-myeloma agent in first-line therapy, and 60.7% of patients had a previous SRE. The number of patients across both study arms with ISS stage I, stage II, and stage III at diagnosis were 32.4%, 38.2%, and 29.3%, respectively.
Median age was 63 years, 82.1% of patients were White, and 45.6% of patients were women. The median number of doses administered was 16 for XGEVA and 15 for zoledronic acid. In patients with newly diagnosed multiple myeloma, XGEVA was non-inferior to zoledronic acid in delaying the time to first SRE following randomization (see Figure 2 and Table 2).

Effect on pain: For pain measures based on BPI-SF, the point estimate (95% CI) of the average area under the curve (AUC) of worst pain, relative to baseline, was -1.04 (-1.32, -0.77) for XGEVA and -0.69 (-0.95, -0.43) for zoledronic acid with a point estimate (95% CI) for the treatment difference of -0.35 (-0.73, 0.03) and p = 0.072, and the point estimate (95% CI) of the average AUC of the pain severity score, relative to baseline, was -0.72 (-0.92, -0.51) for XGEVA and -0.40 (-0.59, -0.20) for zoledronic acid, with a point estimate (95% CI) for the treatment difference of -0.32 (-0.60, -0.04) and p = 0.024, other measures showed similar results between XGEVA and zoledronic acid. XGEVA and zoledronic acid showed similar results in time to, and proportion by visit for ≥ 2-point decrease, ≥ 2-point increase, and > 4-point in worst pain score.
Treatment of Giant Cell Tumor of Bone in Adults or Skeletally Mature Adolescents: The safety and efficacy of XGEVA was studied in two phase 2 open-label, single-arm trials (Studies 5 and 6) that enrolled 305 patients with giant cell tumor of bone that was either unresectable or for which surgery would be associated with severe morbidity. Patients received 120 mg XGEVA subcutaneously every 4 weeks with a loading dose of 120 mg on days 8 and 15.
Study 5 enrolled 37 adult patients with histologically confirmed unresectable or recurrent giant cell tumor of bone. The main outcome measure of the trial was response rate, defined as either at least 90% elimination of giant cells relative to baseline (or complete elimination of giant cells in cases where giant cells represent < 5% of tumor cells), or a lack of progression of the target lesion by radiographic measurements in cases where histopathology was not available. Of the 35 patients included in the efficacy analysis, 85.7% (95% CI: 69.7, 95.2) had a treatment response to XGEVA. All 20 patients (100%) with histology assessments met response criteria. Of the remaining 15 patients, 10 (67%) met response criteria based on radiology data.
Study 6 enrolled 282 adult or skeletally mature adolescents with giant cell tumor of bone. Of these patients, 10 were aged 13-17 years (see Precautions). Patients were assigned to one of three cohorts: Cohort 1 included patients with surgically unsalvageable disease (e.g., sacral, spinal, or multiple lesions, including pulmonary metastases); Cohort 2 included patients with surgically salvageable disease whose planned surgery was associated with severe morbidity (e.g., joint resection, limb amputation, or hemipelvectomy); Cohort 3 included patients previously participating in Study 5 and rolled over into this study.
The outcome measures of the study were time to disease progression (based on investigator assessment) for Cohort 1 and proportion of patients without any surgery at month 6 for Cohort 2. Pain outcomes and clinical benefit were also assessed.
In Cohort 1, median time to disease progression was not reached, as only 6 of the 169 treated patients (3.6%) had disease progression. In Cohort 2, XGEVA prolonged the time to surgery, reduced the morbidity of planned surgery, and reduced the proportion of patients undergoing surgery. Sixty-four of the 71 (90.1%; 95% CI: 80.7%, 95.9%) evaluable patients treated with XGEVA had not undergone surgery by month 6. Overall, of 100 patients for whom surgery was planned, 74 patients (74%) had no surgery performed, and 16 patients (16%) underwent a less morbid surgical procedure from that planned at baseline (see Table 3).
In Cohorts 1 and 2 combined, a clinically meaningful reduction in worst pain (i.e., ≥ 2-point decrease from baseline) was reported for 31.4% of patients at risk (i.e., those who had a worst pain score of ≥ 2 at baseline) within 1 week of treatment, and ≥ 50% at week 5. These pain improvements were maintained at all subsequent evaluations. In a post-hoc analysis, at least half of evaluable patients had a ≥ 30% reduction in worst pain score from baseline at all post-baseline time points beginning at week 9.
A retrospective independent review of radiographic imaging data was performed for patients enrolled in Studies 5 and 6. Of the 305 patients enrolled in Studies 5 and 6, 190 had at least 1 evaluable time point response and were included in the analysis (see Table 4).
Patients were evaluated by the following response criteria to determine objective tumor response: • Modified Response Evaluation Criteria in Solid Tumors (RECIST 1.1) to evaluate tumor burden based on computed tomography (CT)/magnetic resonance imaging (MRI),
• Modified European Organization for Research and Treatment of Cancer (EORTC) criteria to evaluate metabolic response using fluorodeoxyglucose positron emission tomography (FDG-PET),
• Modified Inverse Choi criteria to evaluate tumor size and density using Hounsfield units based on CT/MRI (Density/Size).
Overall, XGEVA achieved objective tumor responses in 71.6% (95% CI: 64.6, 77.9) of patients (see Table 4). The median time to response was 3.1 months (95% CI: 2.89, 3.65).
The median duration of response was not estimable, as few patients experienced disease progression, with a median follow-up of 13.4 months. Efficacy results in skeletally mature adolescents appeared to be similar to those observed in adults. (See Tables 3 and 4.)

Treatment of Hypercalcemia of Malignancy: The safety and efficacy of XGEVA was studied in a phase 2 open-label, single-arm trial (Study 7) that enrolled 33 patients with hypercalcemia of malignancy (with or without bone metastases) refractory to treatment with intravenous bisphosphonate. Patients received XGEVA subcutaneously every 4 weeks with additional 120 mg doses on days 8 and 15 of the first month of therapy.
In this study, refractory hypercalcemia of malignancy was defined as an albumin-corrected calcium of > 12.5 mg/dL (3.1 mmol/L) despite treatment with intravenous bisphosphonate in the last 7-30 days. The primary endpoint was the proportion of patients achieving a response, defined as corrected serum calcium (CSC) ≤ 11.5 mg/dL (2.9 mmol/L), within 10 days after XGEVA administration. XGEVA was associated with rapid and sustained decreases in serum calcium in the majority of patients including those with or without bone metastases (see Figure 5 and Table 5).