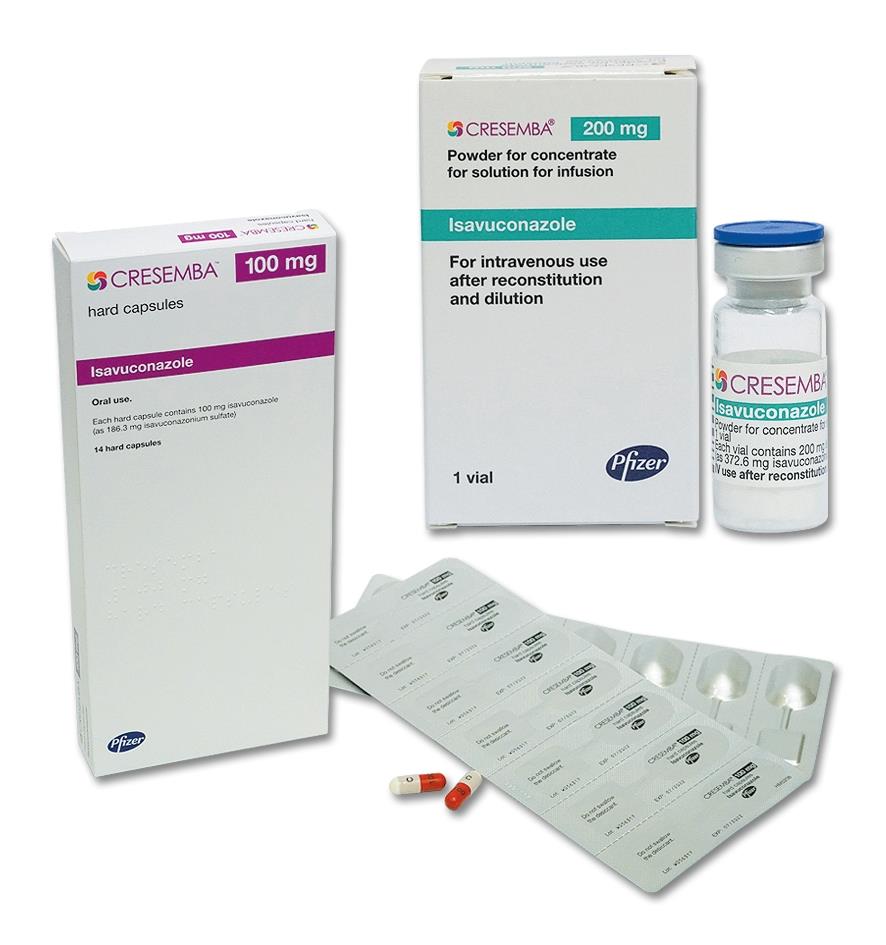 Concise Prescribing Info Full Prescribing Info Contents Description Action Indications/Uses Dosage/Direction for Use Overdosage Contraindications Special Precautions Use In Pregnancy & Lactation Adverse Reactions Drug Interactions Caution For Usage Storage MIMS Class ATC Classification Thai FDA Category Presentation/Packing
Full Prescribing Info
Contents
Isavuconazole.
Description
Cap: Each capsule contains 100 mg isavuconazole (as 186.3 mg isavuconazonium sulfate).
Inj: Each vial contains 200 mg isavuconazole (as 372.6 mg isavuconazonium sulfate).
Excipients/Inactive Ingredients: Cap: Capsule contents: Magnesium citrate (anhydrous), microcrystalline cellulose, talc, colloidal anhydrous silica, stearic acid.
Capsule shell: Hypromellose, water, red iron oxide (E172) (capsule body only), titanium dioxide (E171), gellan gum, potassium acetate, disodium edetate, sodium laurilsulfate.
Printing ink: Shellac, propylene glycol, potassium hydroxide, black iron oxide (E172).
Inj: Mannitol, Sulfuric acid (for pH-adjustment).
Action
Pharmacotherapeutic group: Antimycotics for systemic use, triazole derivatives, ATC code: J02AC05.
Pharmacology: Pharmacodynamics: Mechanism of Action: Isavuconazole is the active moiety formed after oral or intravenous administration of isavuconazonium sulfate (see Pharmacology: Pharmacokinetics in the following text).
Isavuconazole demonstrates a fungicidal effect by blocking the synthesis of ergosterol, a key component of the fungal cell membrane, through the inhibition of cytochrome P-450-dependent enzyme lanosterol 14-alpha-demethylase, responsible for the conversion of lanosterol to ergosterol. This results in an accumulation of methylated sterol precursors and a depletion of ergosterol within the cell membrane, thus weakening the structure and function of the fungal cell membrane.
Clinical efficacy and safety: Treatment of invasive aspergillosis: The safety and efficacy of isavuconazole for the treatment of patients with invasive aspergillosis was evaluated in a double-blind, active-controlled clinical study in 516 patients with invasive fungal disease caused by Aspergillus species or other filamentous fungi. In the intent-to-treat (ITT) population, 258 patients received isavuconazole and 258 patients received voriconazole. CRESEMBA was administered intravenously (equivalent to 200 mg isavuconazole) every 8 hours for the first 48 hours, followed by once-daily intravenous or oral treatment (equivalent to 200 mg isavuconazole). The protocol-defined maximum treatment duration was 84 days. Median treatment duration was 45 days.
The overall response at end-of-treatment (EOT) in the myITT population (patients with proven and probable invasive aspergillosis based on cytology, histology, culture or galactomannan testing) was assessed by an independent blinded Data Review Committee. The myITT population comprised 123 patients receiving isavuconazole and 108 patients receiving voriconazole. The overall response in this population was n=43 (35%) for isavuconazole and n=42 (38.9%) for voriconazole. The adjusted treatment difference (voriconazole-isavuconazole) was 4.0 (95% confidence interval: -7.9; 15.9).
The all-cause mortality at Day 42 in this population was 18.7% for isavuconazole and 22.2% for voriconazole. The adjusted treatment difference (isavuconazole-voriconazole) was -2.7% (95% confidence interval: -12.9; 7.5).
Treatment of mucormycosis: In an open-label non-controlled study, 37 patients with proven or probable mucormycosis received isavuconazole at the same dose regimen as that used to treat invasive aspergillosis. Median treatment duration was 84 days for the overall mucormycosis patient population, and 102 days for the 21 patients not previously treated for mucormycosis. For patients with probable or proven mucormycosis as defined by the independent Data Review Committee (DRC), all-cause mortality at Day 84 was 43.2% (16/37) for the overall patient population, 42.9% (9/21) for mucormycosis patients receiving isavuconazole as primary treatment, and 43.8% (7/16) for mucormycosis patients receiving isavuconazole who were refractory to, or intolerant of, prior antifungal therapy (mainly amphotericin B-based treatments). The DRC-assessed overall success rate at EOT was 11/35 (31.4%), with 5 patients considered completely cured and 6 patients partially cured. A stable response was observed in an additional 10/35 patients (28.6%). In 9 patients with mucormycosis due to Rhizopus spp., 4 patients showed a favourable response to isavuconazole. In 5 patients with mucormycosis due to Rhizomucor spp., no favourable responses were observed. The clinical experience in other species is very limited (Lichtheimia spp. n=2, Cunninghamella spp. n=1, Actinomucor elegans n=1).
Pharmacokinetics: Isavuconazonium sulfate is a water-soluble prodrug that can be administered as an intravenous infusion or orally as hard capsules. Following administration, isavuconanium sulfate is rapidly hydrolysed by plasma esterases to the active moiety isavuconazole; plasma concentrations of the prodrug are very low, and detectable only for a short time after intravenous dosing.
Absorption: Following oral administration of CRESEMBA in healthy subjects, the active moiety isavuconazole is absorbed and reaches maximum plasma concentrations (Cmax) approximately 2-3 hours after single and multiple dosing (see Table 1).

As shown in Table 2 below, the absolute bioavailability of isavuconazole following oral administration of a single dose of CRESEMBA is 98%. Based on these findings, intravenous and oral dosing can be used interchangeably. (See Table 2.)

Caution For Usage
Incompatibilities: Cap: Not applicable.
Inj: In the absence of compatibility studies, this medicinal product must not be mixed with other medicinal products except those mentioned in the following text.
Special precautions for disposal and other handling: Reconstitution: One vial of the powder for concentrate for solution for infusion should be reconstituted by addition of 5 mL water for injections to the vial. The vial should be shaken to dissolve the powder completely. The reconstituted solution should be inspected visually for particulate matter and discoloration. Reconstituted concentrate should be clear and free of visible particulate. It must be further diluted prior to administration.
Dilution and administration: After reconstitution, the entire content of the reconstituted concentrate should be removed from the vial and added to an infusion bag containing at least 250 mL of either sodium chloride 9 mg/mL (0.9%) solution for injection or 50 mg/mL (5%) dextrose solution. The infusion solution contains approximately 1.5 mg/mL isavuconazonium sulfate (corresponding to approximately 0.8 mg isavuconazole per mL). After the reconstituted concentrate is further diluted, the diluted solution may show fine white-to-translucent particulates of isavuconazole, that do not sediment (but will be removed by in-line filtration). The diluted solution should be mixed gently, or the bag should be rolled to minimise the formation of particulates. Unnecessary vibration or vigorous shaking of the solution should be avoided. The solution for infusion must be administered via an infusion set with an in-line filter (pore size 0.2 μm to 1.2 μm) made of polyether sulfone (PES).
Isavuconazole should not be infused into the same line or cannula concomitantly with other intravenous products.
Storage conditions after reconstitution and dilution are provided in Storage.
If possible, the intravenous administration of isavuconazole should be completed within 6 hours after reconstitution and dilution at 15°C to 25°C. If this is not possible, the infusion solution should be immediately refrigerated after dilution, and infusion should be completed within 24 hours. Further information regarding the storage conditions after reconstitution and dilution of the medicinal product is provided in Storage.
An existing intravenous line should be flushed with sodium chloride 9 mg/mL (0.9%) solution for injection or 50 mg/mL (5%) dextrose solution.
This medicinal product is for single use only. Discard partially-used vials.
This medicinal product may pose a risk to the environment (see Pharmacology: Toxicology: Preclinical safety data under Actions).
Any unused medicinal product or waste material should be disposed of in accordance with local requirements.
Storage
Cap: Store below 30ºC. Store in the original packaging in order to protect from moisture.
Inj: Store in a refrigerator (2°C to 8°C).
For storage conditions after reconstitution and dilution of the medicinal product, see Shelf-life.
Shelf-life: Cap: 30 months.
Inj: 48 months.
Chemical and physical in-use stability after reconstitution and dilution has been demonstrated for 24 hours at 2°C to 8°C, or 6 hours at 15°C to 25°C.
From a microbiological point of view, the product should be used immediately. If not used immediately, in-use storage times and conditions prior to use are the responsibility of the user and would normally not be longer than 24 hours at 2°C to 8°C, unless reconstitution and dilution has taken place in controlled and validated aseptic conditions.
MIMS Class
Antifungals
ATC Classification
J02AC05 - isavuconazole ; Belongs to the class of triazole derivatives. Used in the systemic treatment of mycotic infections.